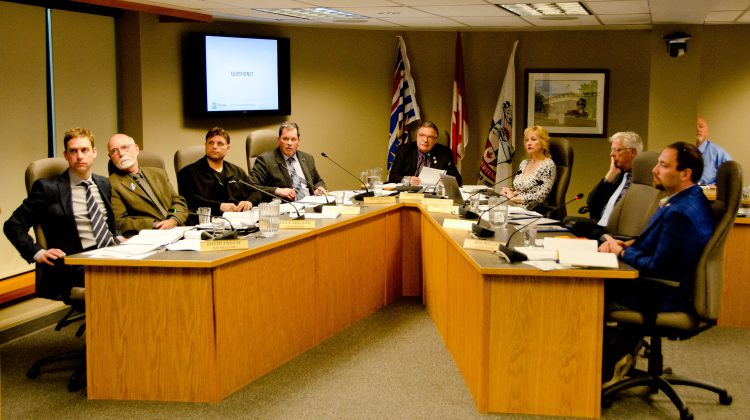 Members of Courtenay city council are pictured in a file photo. Photo by James Wood/98.9 The Goat/Vista Radio

COURTENAY, B.C- Despite a last-ditch effort by Councillor Mano Theos, the majority of property owners in Courtenay will still see their municipal taxes changing this year.

On Monday evening, Courtenay city council voted to stick to the 2.83 per cent tax rate increase that affects commercial and residential property tax rates, with the goal of balancing out the tax burden equally among both groups.

The rate was up for final approval, and Theos had been looking to lower it for commercial properties.

He made a motion to lower the multiplier for property taxes on commercial properties to 2.95 per cent, instead of the current rate of 3.03986.

His motion did not pass, with only Theos and Mayor Larry Jangula voting in favour.

Jangula then voted against the final approval of the 2018 tax rate along with Theos.

After the meeting, Jangula expressed concerns about high taxes on commercial properties in Courtenay, mentioning buildings such as the shuttered Thrifty’s location in the downtown core remaining unused and the possibility of taxes being an obstacle.

“It (Theos’s amendment) didn’t go anywhere, so they still have to do that (pay the rate), and it becomes very onerous for small businesses,” said Jangula.