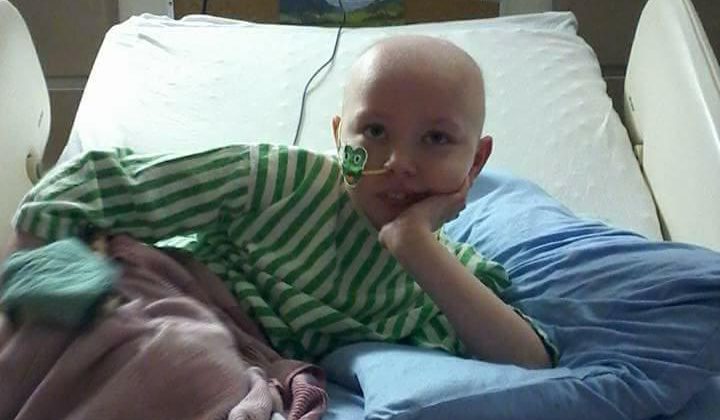 A photo of Kaydence in hospital, supplied by the family.

DENMAN ISLAND, BC- A Denman Island girl is getting ready for another fight for her life.

Kaydence Sadler was only seven years old when she was first diagnosed with leukemia in 2016.

After going to St. Josephs Hospital in Comox for the diagnosis, she was then flown to Children’s Hospital in Vancouver for testing.

“Things were going smoothly the first month, then we seemed to hit road block after road block,” said her mother, Danielle Vandermolen.

According to Vandermolen, Kaydence began to experience fungal infections from chemotherapy treatment, and had open lesions on her lungs, liver, and kidneys.

Her oncology team then recommended she have a bone marrow transplant. Her father, Raymond, was an eligible donor and the transplant was performed in September 2016.

After spending three months in hospital recovering from the transplant, Kaydence was released to the assisted living You Are Not Alone (YANA) apartments in Vancouver, and sent home to Denman Island a few months after.

Just a couple months later, Kaydence was sent back to Vancouver on an emergency flight off Denman Island with a high fever. She suffered from a broken heel bone and spent April to August of 2017 at the Ronald McDonald House in Vancouver.

Later in 2017, she was sent back to the Children’s Hospital with an 80% relapse. Kaydence underwent more treatment and relapsed again in January of this year.

“Kaydence is dealing in the best way she knows how,” said Vandermolen.

“Just by being a kid in the best way she can. When she’s feeling good she runs around and plays and does what she can.”

Vandermolen indicated that it’s difficult to gauge how her daughter is feeling.

“She’s nine and that’s that magical age where kids start to learn how to hide their feelings and their emotions,” said Vandermolen.

“So it gets difficult at times.”

When Kaydence was staying in Vancouver receiving treatment in 2016, she was away from the rest of her family.

Kaydence’s separation from her dad, sister, and grandparents was not only an emotional challenge, but a financial one too.

A family friend, Dianne Radmore, then created a GoFundMe account for the family.

“It defies belief how a young body like hers could possibly endure everything she has been through in this fight to overcome cancer,” said Radmore.

“Her mom, too… unfathomable strength and determination under such incredible stress. My heart goes out to this family and everyone faced with such absolutely exhausting medical challenges.”

Since Dianne’s creation of the GoFundMe account, tens of thousands of dollars have been accumulated in the account.

“The support that we’ve received so far is overwhelming. It touches me knowing that people in the community actually do care,” said Vandermolen.

“I didn’t really know where the GoFundMe account was going to go, and what we have gotten from it has sustained us, along with the support from YANA and other organizations.”

Now, two years after her diagnosis, Kaydence must have intensive treatment in Seattle.

Danielle says the treatment itself is paid for, but all other expenses are not.

“Unfortunately, because they cannot guarantee Kaydence will survive past a year, we cannot get her travel insurance,” said Vandermolen.

“Any other costs that are incurred under her medical condition, we have to cover ourselves. Food for myself and her father, gas, just basic actual items and a lot of the medical requirements of Kaydence.”

Most of the funds in the GoFundMe account have been used since her diagnosis and now the family is facing serious financial struggles.

Anyone in a position to help Kaydence and her family can donate to the GoFundMe at https://www.gofundme.com/kaydencesupport.

Donations can also be made to a bank account called “Kaydence Sadler in Trust Medical Emergency Relief Fund” ,through the Coastal Community Credit Union on 4th Street in Courtenay.