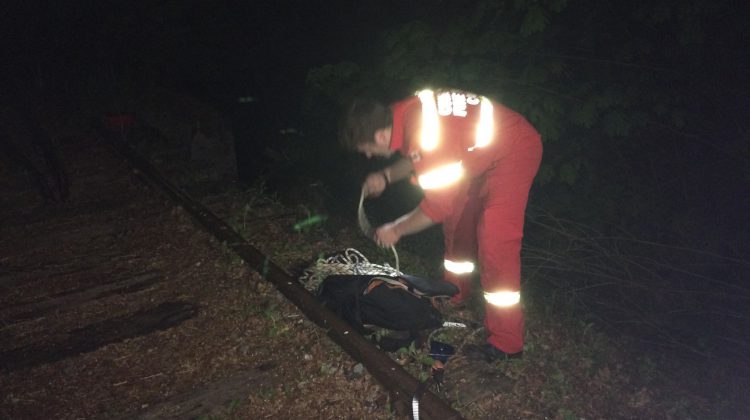 ROYSTON, B.C- A man has been taken to hospital after falling onto boulders along the Trent River.

According to Cumberland fire chief Mike Williamson, a call came in to the firehall around 9:30 p.m. on Monday night, after a man in his 40’s was found at the bottom of the trestle.

The man, whose identity has not been released, appeared to have fallen off the structure and landed in rocks, two feet from the Trent River waterway. People passing through the area had heard him calling for help.

Williamson stated that seven firefighters, four RCMP officers, two paramedics, and members of Ground Search and Rescue responded to the area, and got the man away to hospital by around 10:00 p.m.

“Walking that trestle can be dangerous,” said Williamson.

“We’ve had motorcycle accidents there, we’ve had people just fall going down the trails down to the river, and break legs there. A person tried to rappel off the trestle, and got hung up halfway. Several calls there, just on the border of our rescue area.”

Williamson said that the last he had heard, the man might be flown to Vancouver or Victoria for further medical care.

“It’s a long fall, and he landed on a pile of boulders,” said Williamson.

“I’m pretty sure he had a broken femur, and some other serious injuries. It’s a miracle a person can fall that far and still survive, pretty lucky person.”

He also warned users of the trails in the area to use caution.

“If you’re down the Trent there, it’s a nice spot, but those trails are very steep, and the trestle is very dangerous if you get close to the edge,” said Williamson.

“Use extreme caution, when you’re on that thing.”

According to the Comox Valley RCMP, the man was conscious, breathing, and speaking with police at the scene, and was transported to hospital due to his injuries.

The matter is not being considered suspicious.