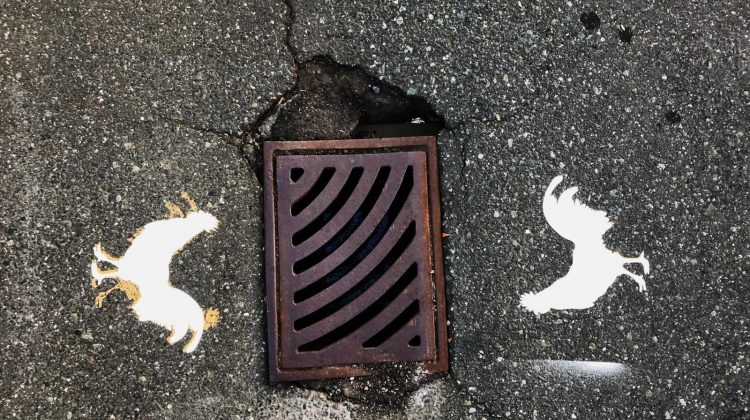 An example of Tracey Peter's artwork. Photo by James Wood/98.9 The Goat/Vista Radio.

MERVILLE, B.C. – If you’ve spotted a chicken painting beside a storm drain, and are wondering who’s behind the artwork, your answer is Tracey Peter.

Over the past few years, line painters across the country have spray-painted fish images beside storm drains to raise awareness about the impacts pollution has on animals.

Peter is doing something a little different. Instead of drawing fish, she’s painting images of chickens to raise awareness on wildlife protection.

“At the time when we started line painting, we didn’t have a fish, but had chicken stencils, so we thought instead of putting a fish where the manholes are, we’ll put a chicken as a symbol of our work and to remind people that whatever gets pushed down there gets filtered and comes back to us and our animals,” she said.

Initially, Peter just stenciled in the chicken images in Real Canadian Superstore parking lots across Vancouver Island, but around eight years ago, she said that she’s spread out to cover different locations.

Peter noted that operating the poultry farm and working with chickens was a major inspiration in her artwork.

“It’s just a reminder of our animals, that we are eating, and to be aware of what’s going into them.”