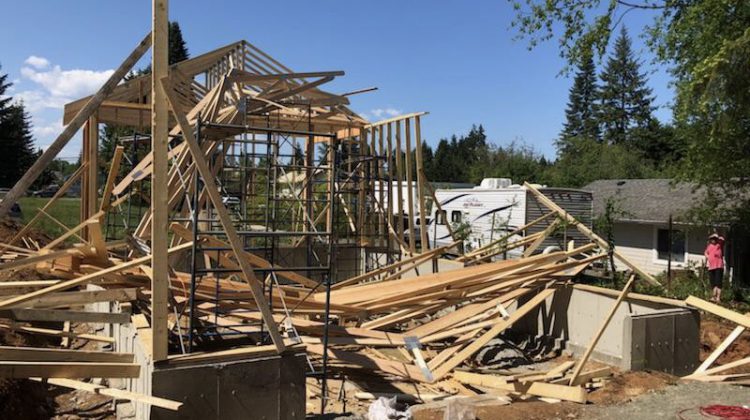 The collapsed structure in Cumberland, pictured in a supplied photo from the Cumberland Fire Department.

CUMBERLAND, B.C- Two people are in hospital after getting injured at a work site in Cumberland.

According to Cumberland fire chief Mike Williamson, a call came in around 2:30 p.m. after a truss collapsed near the intersection of Cumberland Road and Bevan Road. Workers had been assembling the truss in a new construction, and the structure collapsed after a strong gust of wind knocked it over.

Two workers fell 15 feet during the collapse and sustained back and stomach injuries as a result. They were briefly trapped in the wreckage while firefighters worked to get them out of the area.

Williamson indicated the pair were in “quite a bit of pain” and that they were taken to hospital for further care. The area was cleared by firefighters by 3:00 p.m.

“There won’t be any construction there today, for sure,” said Williamson.

Williamson said he didn’t believe the injuries were life threatening.