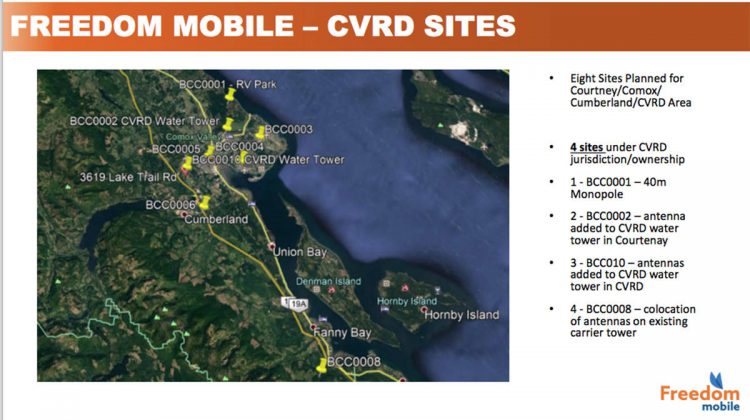 A map of the proposed sites from the Freedom Mobile presentation.

COURTENAY, B.C- Another cell service option could be coming to the Comox Valley.

Telecommunications company Freedom Mobile Inc. is looking at putting in eight new wireless cell service sites in the area, and presented the idea to the Electoral Services Committee of the Comox Valley Regional District (CVRD) on Monday.

The company is currently in larger urban areas throughout Canada, such as Toronto, Edmonton, Calgary, and Vancouver, but has been working on expanding to smaller areas.

The infrastructure the company is looking at putting in locally would be a set of cell service monopoles, which would be installed in new locations as well as existing ones. One would be in Fanny Bay, one in Area B of the CVRD, one due south of Cumberland, one off Lake Trail Road, and the other four within the limits of Courtenay and Comox.

According to Alana Mullaly, the Manager of Planning Services at the CVRD, the idea had a positive reception from the committee.

“They were quite receptive to the idea that additional network opportunities would be coming to the Valley for people,” said Mullaly.

“They certainly appreciated the effort that the company is making towards co-location, rather than just new towers.”

The CVRD has no jurisdiction over installation of cellular infrastructure, with that responsibility sitting with the federal government. However, installation of some of the towers is being planned for local water towers, which would require an agreement from the CVRD.

Mullaly indicated that owners of properties adjacent to planned sites of the towers will be consulted by the company, though the infrastructure plan might not come back before the CVRD in the future.