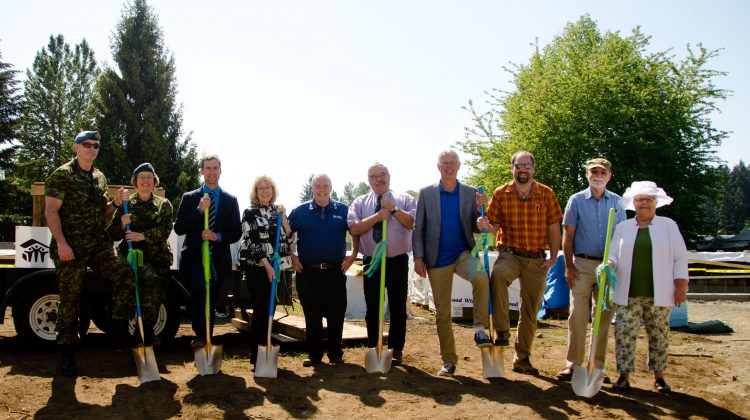 COURTENAY, B.C- The ground has been broken on one of the Valley’s latest housing project.

Habitat for Humanity is building a 10-home development at 1330 Lake Trail Road, across from Lake Trail Middle School in Courtenay’s west end. The

The construction of the project is planned to be split into four phases. The first four units are expected to be available for qualified families in fall 2018, with the rest of the units built over the next three years.

The Valley development is proceeding at the same time as an 11-unit development along Hilchey Road in Campbell River.

A ground breaking ceremony was held today for the Valley development, after speeches from numerous dignitaries and two blessings of the land from K’ómoks First Nation elder Florence Howell and Reverend Ryan Slifka of St. George’s United Church.

Members of the McQuillan family, who had a homestead at the build site, were also on-hand for the ceremony.

According to Pat McKenna, the Executive Director of Habitat’s Vancouver Island North division, work will be starting next week on walls for two units. Two foundations have been poured already, and two houses are expected to be finished by October.

“It’s so good to get the foundations underway,” said McKenna.

“The development process, regardless of how you do it, it does take time and there are a lot of checks and balances. It was a great learning curve, for me to go through it the first time.”

McKenna said he’ll be looking for more land to keep builds going, and indicated that Habitat has received a bequest of land in the Qualicum area. While he couldn’t speak in detail about the bequest, he did say it was “very generous”.

The North Island branch of Habitat for Humanity has been in operation for the last 14 years, and is expected to help 41 families find housing by 2020.