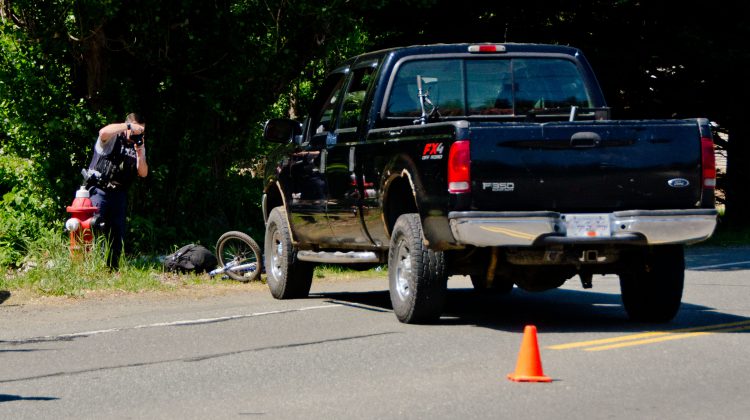 An officer of the Comox Valley RCMP photographs a bike after a collision along Headquarters Road on May 18, 2018. Photo by James Wood/98.9 The Goat/Vista Radio

COURTENAY, B.C- One man has been taken to hospital after a collision involving a truck on Friday afternoon.

According to the RCMP, a call about a crash came in around 1:30 p.m., near the intersection of Headquarters Road and Dingwall Road.

The collision appeared to have taken place between a male cyclist and a black pickup truck, and the scene remained cordoned off an hour after first responders had gotten to the scene.

The cyclist has been taken to hospital with non-life-threatening injuries, and the black truck remained at the scene of the crash. A man was sitting in the truck while officers were investigating the scene, but did not appear to be detained.

The Comox Valley RCMP reduced traffic in the area to one lane while officers investigated, and the route was said to be re-opened by 3:00 p.m.