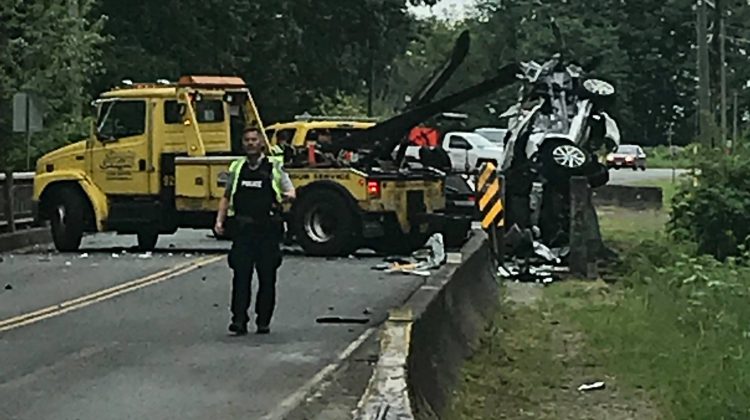 An officer on scene of a crash on the Old Island Highway on May 19, 2018. Photo courtesy Louise Maltais.

According to a report from CHEK News, two people were sent to hospital due to the collision. The report stated that police say speed and alcohol may have been a contributing factor in the crash.

The MyComoxValleyNow.com newsroom has reached out to the authorities for further comment.

UNION BAY, B.C. – Crews are on scene of a single vehicle collision on the Old Island Highway in the Union Bay area.

A call came into the MyComoxValleyNow.com newsroom from the Comox Valley RCMP at around 3:30 a.m. reporting the crash. A tow truck on scene of a single vehicle collision on the Old Island Hwy on May 19, 2018. Photo courtesy Louise Maltais.

The incident was reported to have happened on the bridge into Union Bay above Hart Creek. A witness told the MyComoxValleyNow.com newsroom that two people were sent to hospital, but that remains unconfirmed by the RCMP.

Both lanes in a portion of the highway have been closed. The RCMP said drivers can use the Inland Island Highway bypass at Buckley Bay Road and return to the Old Island Highway via Royston Road.

No further details have been reported by the Comox Valley RCMP.