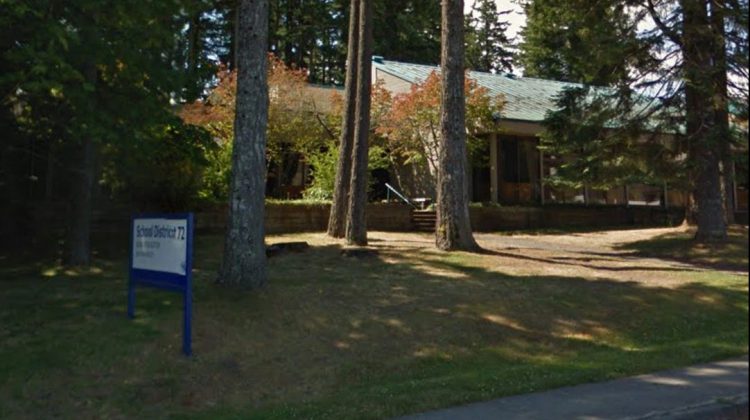 CAMPBELL RIVER, B.C- A man who was giving away anti-SOGI 123 pamphlets at two elementary schools last week said he will visit all the school district 72 schools to do the same, starting this coming Tuesday.

Christian McCay, a Campbell River resident and father of a child who is not yet in the school system, said there will be more volunteers this time around.

“We will be at the schools handing out brochures until we get answers and SOGI is not implemented,” said McCay.

McCay and two others visited Penfield and Georgia Park Elementary last week to hand out the pamphlets.

The group was asked to leave Penfield school property, after which they continued to offer pamphlets just off of the property.

According to McCay, the group will not be on school property this time, instead on the sidewalks outside of it.

Neither McCay or the two other volunteers present had children attending either schools.

Contrary to a letter sent from the school board warning parents of the group, McCay said they were not giving pamphlets to children.

Thomas Longridge, Superintendent of Schools and CEO for the Campbell River School District, said the fact that they are not parents of children in the schools is one of the issues.

“It would not be appropriate for parents from another school or school districts to be on school property or approaching staff or the principal, in regards to something where they do not have a child in attendance,” said Longridge.

“We always have the option of a parent to communicate with the teacher of the child at school in regard to the use of particular resources, as well as the principal of that school at which their child attends.”

“From what I can determine, there’s few, if any, parents with children in our public schools,” said the superintendent.

McCay said he is representing a group of Campbell River citizens who “have the same concerns about SOGI.”

He would not specify how many people are in that group, or how many of them are parents of children in the SD 72 public school system, but said that  there’s “definitely enough for the school district to be concerned about.”

According to McCay, a total of 60 parents “involved” in the school district signed a petition saying they were strongly opposed to the implementation of SOGI and that it is a “gross violation of parental rights and religious freedom.”

McCay also attempted to organize a community meeting to present a list of nine questions to the school board, but it was cancelled when Longridge said he would not attend.

“We don’t feel like continuing a conversation that really isn’t going to be an honest exchange of information, but instead is going to turn into a one sided debate or an opportunity for theatre,” said Longridge.

According to the Superintendent, the group is looking for answers they have already been given.

“There’s been a lot of opportunity for their opinions to be voiced and to gain information, even access to the board and myself in regards to explaining and giving an understanding,” said Longridge.

“They aren’t in agreement with our answers, they have a different position and they want to continually have an opportunity to voice their opinion,” he said.

“Their position is in opposition to where the district is going with supporting students that are LGBTQ and making sure all our school environments are safe for all students,” the superintendent added.

While the materials, which are optional for teachers to use, are available online, the school district is still working on the exact implementation method they will be using.

In reference to McCay and his group handing out pamphlets next week, Longridge said the school district will have to ensure that their property and buildings are secure.

“We have to make sure that learning is not affected, and that people are not accosted in a manner that is not appropriate.”

He said he supports the democratic right to protest, if those protesting conduct themselves in an appropriate manner.

For access to SOGI 123 materials and descriptions of the program, visit these websites.