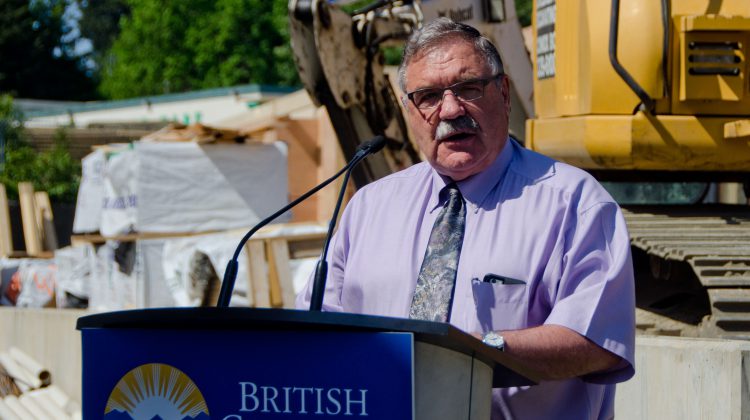 Courtenay mayor Larry Jangula is pictured in a file photo from May 18th, 2018. Photo by James Wood/98.9 The Goat/Vista Radio

Jangula, who serves as the mayor of Courtenay, spoke with the MyComoxValleyNow.com newsroom on Friday regarding a letter to the editor run in the Comox Valley Record on Thursday, which indicated that a number of residents near a proposed housing project in Courtenay were not pleased with the idea.

The letter, which was signed by Kathy Bullock, Donovan Carter, and Mario Lee, stated that it was coming from people living in the area bounded by Fifth and Eighth Streets, Pidcock Avenue, and the old railway line.

The residents said they were “shocked and appalled” by the way council was handling a housing proposal for the area, which would put in 46 units of supportive housing on a vacant lot next to the municipal works yard.

“Through the City’s land use regulation and development approval process it seems councillors and the mayor are in a mad pre-election scramble to score political points to campaign on by making our neighbourhood an over concentration of a social service crisis intervention ghetto and a virtual gulag of social despair and social disorder,” states part of the letter.

“Our neighbourhood was completely surprised by the sudden announcement this development was well underway in its planning and implementation. This facility is to be located on city land at Eighth and Menzies, in a neighbourhood already carrying more than its fair share of social responsibility.”

The letter states that council and the mayor have put themselves in an “untenable” situation, and claims that the project was “secretly advanced.”

“It certainly appears an attempt to claim the moral and intellectual high ground of great political achievement in a way that you can conveniently lay blame and shame upon concerned neighbourhood residents who already carry more than their fair share of social responsibility, should they express any concern,” read the letter.

“This is a cynical political manoeuvre by ambitious politicians looking to advance their ambitions. All this is nothing short of political knee-jerk opportunism and sardine-can social policy, creating more social despair and disparity in the community and especially in our neighbourhood.”

The letter ends by calling on the project to be shut down on May 22nd, when the public hearing is scheduled at City Hall.

Efforts by the MyComoxValley.com newsroom to reach Bullock and Lee were unsuccessful on Friday afternoon, and Carter indicated he had no comment when reached on the phone.

As for Jangula, the mayor stated that the municipal government can’t make decisions based on a letter to the editor. He said that there have been around 25 emails sent to City Hall on the matter, with the majority opposed to the project, with a small amount in favour.

He believed that information presented at the public hearing about the project will help change residents minds.

“I think when people hear about all of the assets of it, and the way it’s going to be run, it may change some minds. It may not change everyone,” said Jangula.

“This is not just 46 homes, and here’s some keys, and have a great time, we’ll see you later. The people that are coming in are very much screened, and supervised to come in. They have to be accepted.”

He was also pleased with the province’s support of the project.

“You hear all the time about people camping, and living on the street,” said Jangula.

“We heard about people living on the theatre property, living along the railway tracks, and pretty well anywhere there’s some kind of isolation, or not homes, people are often found camping, so I think this is a step in the right direction. Will it solve everything? Of course not. But it’s a good, positive step, if it goes through.”

He asked for people to pay attention to the public hearing, and come out in person.

The hearing is scheduled for 5:00 p.m. on Tuesday at City Hall.