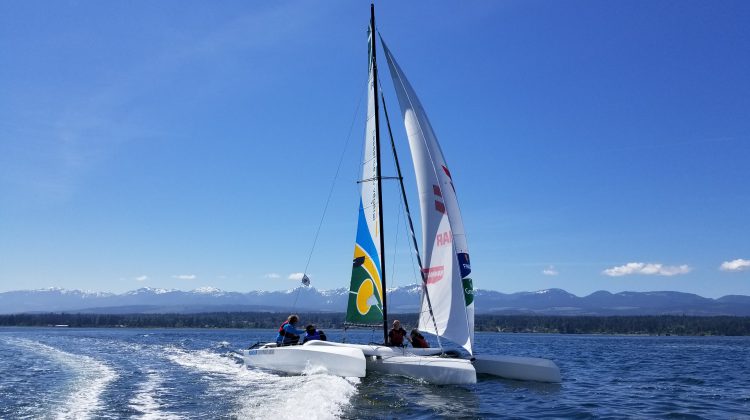 COMOX, B.C. – The feeling of being out on the open water is like none other.

Now, residents can experience that via a new tourist attraction.

Starting this summer, Comox-based Compass Adventure will offer two-hour tours on their trimarans. The sailboats are the fastest of their size in the world, according to Compass Adventure’s Stuart Robinson.

“We wanted to make them accessible to anyone. Normally you wouldn’t be able to go on a performance yacht like this unless you owned one,” Robinson said.

Stuart operates Compass Adventure alongside his brother Andrew and their father, James Robinson. They’ve been operating for over 20 years in the Comox Valley.

“The closest thing you could do (to the trimarans tour) are some very high-end things in the Caribbean where you could hop on an old America’s Cup boat or something like that with a big crew, and you just sit there, which is a great experience as well, because any sailing is great, but we’re just trying to do it a little differently,” he said.

Compass Adventure’s latest attraction puts you in the thick of the action. Participants will head out on the sailboat, with an experienced navigator, but fulfill jobs during the tour, such as raising the sail or steering the boat.

“You will do it,” James Robinson said.

“It’s kind of a mini-learning experience like an America’s Cup athlete.”

The America’s Cup is an international sailing yacht race.

The Robinsons are also working with tourism experts from China to expand their market and bring in tourists from overseas.

“It could open up floodgates to this area of different types of tourism. Sailing is basically elusive for many, and now, we’re making it accessible, and that’s the important thing,” James explained.

In addition to the new tourist attraction, the Compass Adventure crew is gearing up for its second annual Sail Fest at the Comox Marina. Sail Fest takes place during the first official weekend of the summer, June 22 to 24, 2018.

The trimarans tours are scheduled to start in late June and will be available through the rest of the summer season.

Stuart said one of their goals is to include everyone in the sailing culture, to erase the stigma that sailing is an elitist sport, and enable everyone to try it.

“There’s a lot of great sailors in Canada, but we haven’t done a lot of the really big world stuff,” said Stuart.

“There have been little pockets of sailing, but we’re just trying to do something and what we can here to the highest level we can.”

More details about what Compass Adventure has to offer can be found at compassadventure.ca.