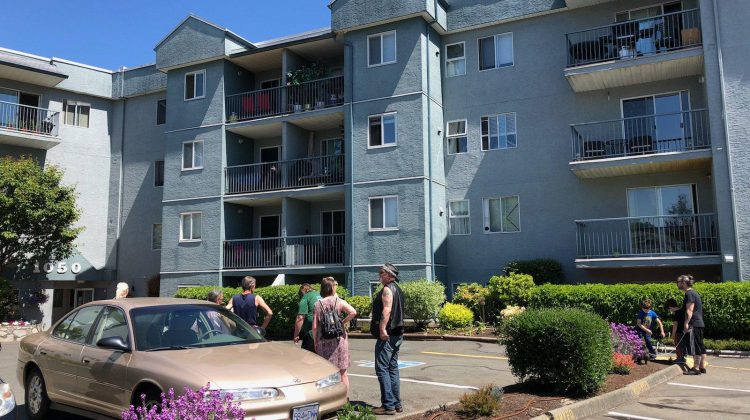 Residents evacuated from an apartment building in Courtenay on May 23, 2018. Photo by James Wood/98.9 The Goat/Vista Radio

COURTENAY, B.C. – An apartment building off of Braidwood was evacuated today after a neighbour called in with signs of smoke coming out of a third floor unit.

“On arrival, there was smoke coming out of the third floor apartment, no answer at the door, so we forced the door inside and they (the resident) had some sort of oil burner in there,” said Courtenay Fire Chief Don Bardonnex.

“There was a fair amount of smoke coming out of that bedroom window.”

Bardonnex said the only damage to the apartment was the knocked down door. He noted that about 25 people evacuated the building.

No major injuries were reported from the scene, although Bardonnex did have a message for residents in regards to candles and oil burners.

“Anything can emit smoke, let your neighbours know what you’re doing, otherwise, they’re concerned for their wellbeing and yours.”

16 firefighters responded to the scene.