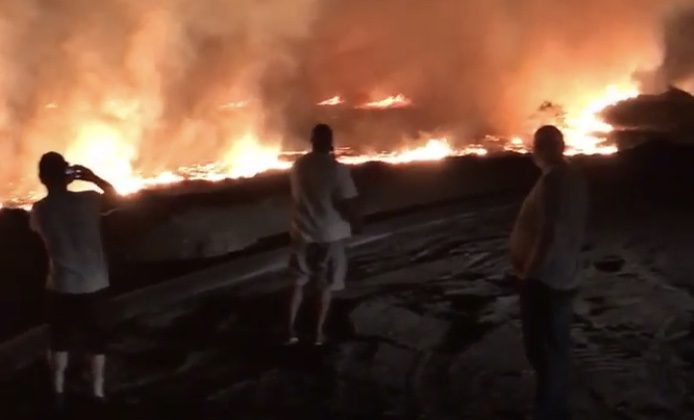 UPDATE 11:00 A.M: The fire is burning around one kilometre away from the mine site, and is considered stable at this time. There are no road closures in the area.

CAMPBELL RIVER, B.C- A wildfire west of Campbell River is still burning out of control this morning.

According to the province’s Coastal Fire Centre, a wildfire that sprang up close to the Quinsam Coal Corporation site along Argonaut Mainline on Wednesday has grown to 12 hectares in size.

The blaze is still believed to be human-caused, though the area is not safe enough for an investigator to examine the exact cause. 19 firefighters are currently on-site near the area, along with two water trucks and two helicopters.

The fire is now burning in logging debris in the area, and is still considered out of control, though it is no longer close to the coal mine operation.

The Coastal Fire Centre did not anticipate any control issues arising, and no additional firefighting resources have been called in at this time.

There is currently no official information on any damages from the fire to the nearby mine site, and when evacuated workers will be able to return to the operation.

Image caption: Three workers at the Quinsam coal mine near Campbell River watch as a fire burns near the operation on Wednesday night. Image courtesy of Norm Sewid.