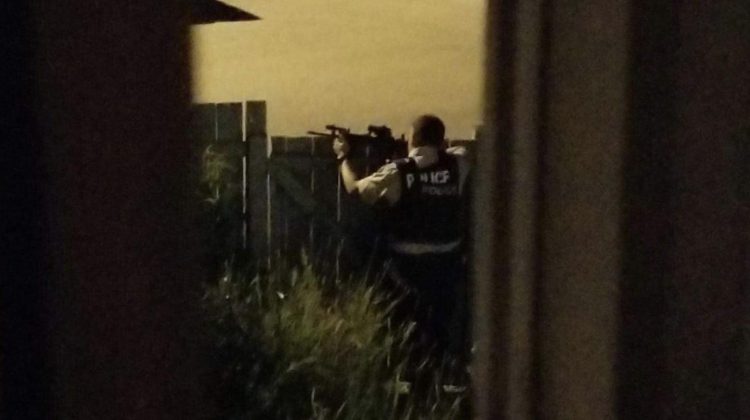 An RCMP officer on scene of the incident. Photo courtesy Cain Manton.

UPDATE: The Comox Valley RCMP have confirmed that shots were fired in the incident. The gunfire damaged a nearby vehicle in the 400 block of Panorama Crescent.

No injuries were reported and the RCMP stated that all parties involved knew each other, although this is not believed to be a random incident.

Police continue to gather evidence in the area. The RCMP’s Major Crime Unit is investigating, working alongside the Integrated Forensic Section, and General Duty Investigators. Anyone with information is asked to call the RCMP or CrimeStoppers.

“They were in our yard watching the house across the street on Panorama Crescent and they had about four or five armed police talking about how they were going to go in,” he said.

Manton said someone was shot at, and after the gunfire was heard, that’s when the Comox Valley RCMP arrived on scene.

COURTENAY, B.C. – The Comox Valley RCMP have taped off a block of Panorama Crescent and Nim Nim Avenue in Courtenay.

Details are scarce, but the RCMP responded to a residence along the block last night, where an officer was seen pointing a gun on-site. An RCMP cruiser outside the blocked off area. Photo by Justin Goulet/98.9 The Goat/Vista Radio.

Crews were still on scene as of 9 a.m. Saturday morning.

Further details will be added to this report when they become available.