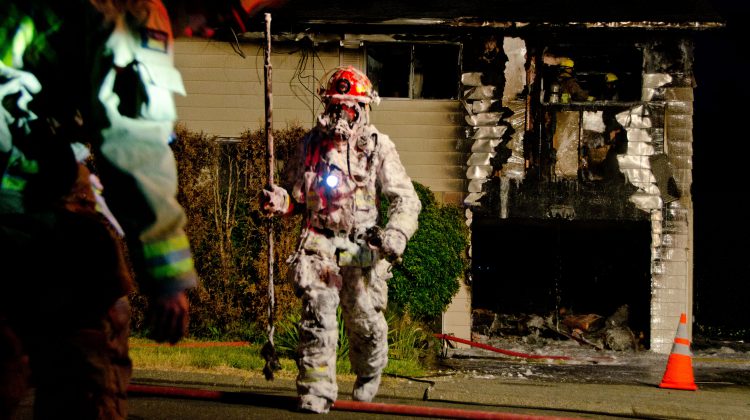 A member of the Courtenay fire department walks away from a fire damaged home along 26th Street on May 26th, 2018. Photo by James Wood/98.9 The Goat/Vista Radio

COURTENAY, B.C- A home in the Comox Valley has been severely damaged after a fire on Saturday night.

According to Courtenay fire chief Don Bardonnex, the call about the fire came in around 9:14 p.m. The flames started in the back of a garage of a home along the north side of 26th Street in Courtenay, close to where the road meets Piercy Avenue.

The fire heavily damaged the home’s garage, as well as the two rooms above the space. The rest of the upper floor suffered heavy smoke damage.

Bardonnex stated that a fallen power line caused some difficulty for firefighters during the blaze, forcing them to go around the back of the structure. Once the flames were doused with water and foam, the fire was knocked down within three and a half minutes.

Three fire engines and one ladder truck responded to the area, along with 22 firefighters. A unit from BC Ambulance and at least two RCMP officers were also present in the area at the time.

No injuries were reported from the scene, and Bardonnex thanked the firefighters present.

“(It was) an awesome job by the guys,” said Bardonnex.

“I’m glad they got out here on the weekend.”

The two occupants of the home were rescued by passerby, who had been in the area when the fire began to cause heavy smoke.

The two men, David Sprout and Dale Audley, had pulled onto the road when they noticed the glow of flames in the garage and smoke in the area. They then saw one of the homeowners, who had been moving his car, and asked if there was anyone else in the home.

According to Audley, the man said his wife was still inside the home.

“I grabbed his wife,” said Audley.

“I asked him if it was ok and got his wife first, I didn’t just run in. I coaxed her out of the house, she didn’t want to come out right away, she was trying to get dressed.”

Audley said the man’s wife had told him their cats were still inside after he got her out, and he went back in to grab them. He found one and believed the other had run off the balcony.

As for Sprout, he had helped get a hose from the man, and worked to spray down the flames before firefighters arrived. A neighbour also helped, according to Sprout, but everyone was forced to run when the power line came down nearby.

Bardonnex didn’t have exact information on what had happened to the cats when asked, but did state he hadn’t heard any concerns about them.

A clear cause for the fire has not yet been determined.