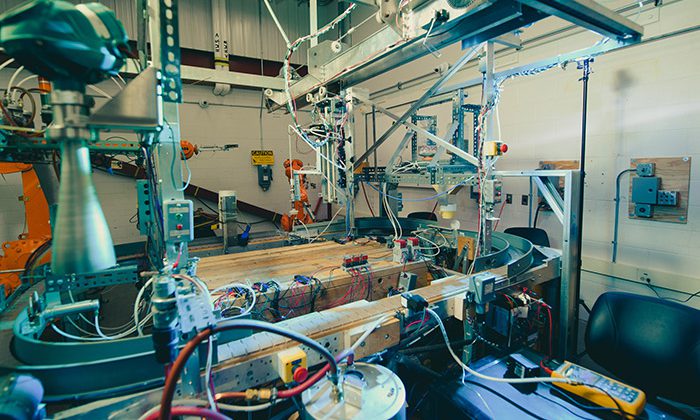 CAMPBELL RIVER, B.C. – It isn’t your typical kind of robot.

“It started with just a general budget and a decision by our teachers to create something that incorporated all the things we learned over the years,” said Tyler Kelly, one of the students involved in the project.

“Then we had to come up with an idea on what we wanted to make. This year, we decided to make yogurt and distribute it to the customer.”

Customers can choose between four flavours of yogurt: peach, raspberry, mixed berry and strawberry, along with toppings of sprinkles or granola.

Students have already demonstrated the machine, and Kelly said it went extremely well. The way it works sees a cup being picked up by a robot, and then placed on a conveyer belt.

The cup makes its way down the conveyer and receives the different flavoring and toppings. “Then a smaller robot picked up the cup, put it in front of the user, picked up a spoon and then put it in the cup,” Kelly said.

He noted that it took students about two and a half weeks to build the machine, with a week and a half of prep-work before construction started.

“It was two very hard weeks, and when it all worked and came together, it was a pretty great feeling,” Kelly said.

Students are currently finishing up the technical report portion of the project.

“What students have been learning for the last two years all came together in this final project,” said instructor Brad Harsell.

“The students this year really showed some incredible ingenuity in the way they took normal things and then repurposed them as part of this project.”