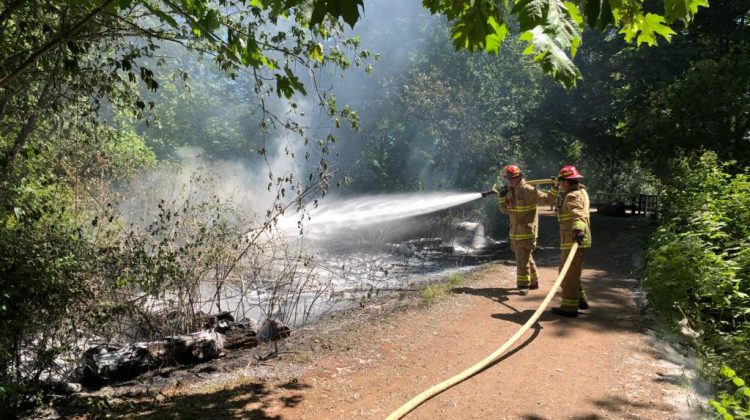 Courtenay fire crews on scene of a brush fire in Simms Park on May 29, 2018. Photo by James Wood/98.9 The Goat/Vista Radio

COURTENAY, B.C. – The Courtenay Fire Department took down a brush fire at Simms Park this afternoon.

Courtenay Fire Chief Don Bardonnex said the fire was reported to be 100 metres by 20 metres in size at its worst, before crews arrived.

“It’s all low-growth right now, and what was happening is there was a small fire that spread through the cottonwood fluff, and that’s just like gasoline. It runs fast, you light it up and it just travels,” he said.

“It gets some dry growth and starts another spot fire and keeps going.”

The cause of the burn is not known at this time, although Bardonnex said he has noticed some smokers tossing their cigarette butts out of their cars, which you can get fined for.

He said the fire spread to about six spots in the brush.

Fortunately, the fire was not as bad as it could have been.

“The wind like we had this morning, and the heat, it gets into some low hanging stuff and it could go (the fire could spread), but we’re fortunate it didn’t.”

This past weekend, crews knocked down a smaller brush fire near the same forested area of Simms Park.

After responding to the fire, Bardonnex had a safety message to residents.

“Please be careful with your cigarettes,” he said.

“We can’t push that enough. The most common cause of this stuff is people just being lazy and tossing them (cigarette butts) either out of their vehicles or down trails.”