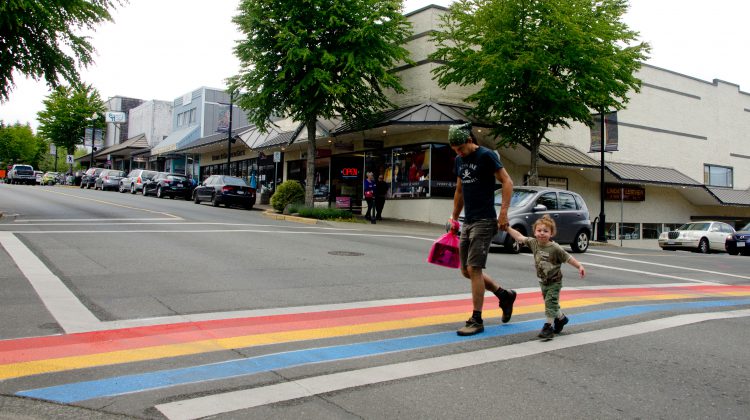 Esteban Zaragoza and Donovan Zaragoza cross the rainbow crosswalk at Duncan Ave and 5th Street on the afternoon of May 31st, 2018. ( Vista Radio stock image)

The new rainbow crosswalk in Courtenay’s downtown is taking shape at the intersection of Duncan and 5th Street, with several colours already filled in on the pedestrian crossing. The paint is being laid down before the walk’s official unveiling, slated for this weekend.

The crosswalk will be unveiled on Saturday, during “Elevate the Intersection”, a festival being put on to mark the occasion.

Elevate, Downtown Courtenay, Comox Valley Pride and the Atlas Café are just some of the groups that will be on hand for the event.

“Pretty much the whole community is going to be involved in launching this,” said Elevate’s Meaghan Cursons, speaking about the event last week.

“We’re not doing it with speeches and handshakes, we’re doing it as a collaborative ribbon cutting, and it’s not like any ribbon-cutting you’ve ever seen before.”

She said they’re going to essentially be “weaving a rainbow through the entire intersection” during the event.

Cursons said there would be performances from the hip-hop coalition, a canopy dance and flash mobs from local schools.

“There’s some very cool stuff coming together,” she said.

The Elevate the Intersection event is scheduled for Saturday, June 2, starting at 7:00 p.m. at the corner of 5th Street and Duncan Avenue in Courtenay.

More details can be found at the event’s Facebook page.