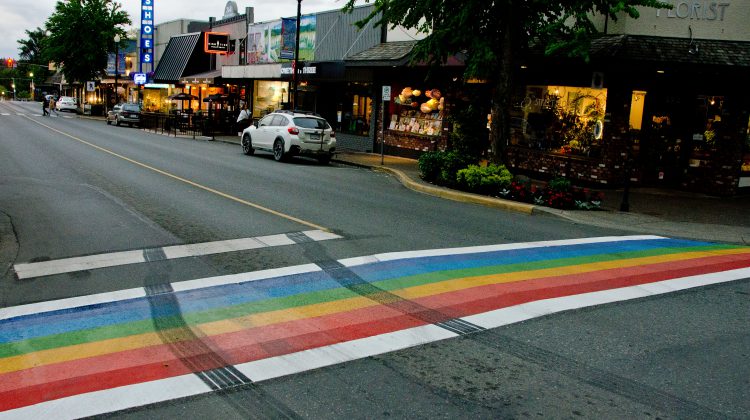 Tire streaks along a new rainbow crosswalk in downtown Courtenay are seen on June 1st, 2018. Photo by James Wood/98.9 The Goat/Vista Radio

COURTENAY, B.C- A splash of colour in downtown Courtenay has been marred with black streaks.

Within 24 hours of being laid down, at the intersection of Duncan Avenue and 5th Street in the middle of Courtenay’s downtown, the new rainbow crosswalk has been vandalized by what appears to be two heavy tire burnouts.

June 1st also marks the first day of Pride Week, and many downtown businesses have put rainbow displays in their windows.

The marks are across the westbound lane of 5th Street as it passes Duncan, leading into the intersection and fading up the slope from the crosswalk.

According to Sarah Larson, who works in the downtown core, a loud squeal was heard in the area around 5:30 p.m. After she came outside to see what had happened, the two large black marks were visible, and bystanders told her that a large white truck had been the vehicle responsible.

People passing through the area around 9:00 p.m. remarked on the streaks as they walked by. One man, Courtenay resident Allen Smith, was angered by the vandalism.

Another Courtenay resident, Else Klevjer, had been passing through the area on her way home, and parked nearby after seeing the marks. She spoke to MyComoxValleyNow.com after photographing the intersection.

She hoped the walk is restored.

“I hope they repaint it,” said Klevjer.

“I would hope they still have some paint, and do it in the middle of the night when nobody is there. Maybe they need to post a guard.”

Crosswalks like this have been installed in communities across North America for years now, including communities on the Island like Campbell River. There are some concerns however, of vandalism.

Last year, the Campbell River crosswalk was damaged by tire marks shortly after its installation.

Mayor Larry Jangula was the lone member of council against the installation, citing his concerns for vandalism and the cost of the project at the time of the council vote.

The Elevate the Intersection event, meant to celebrate the crosswalk, is scheduled for tomorrow, starting at 7:00 p.m. at the corner of 5th Street and Duncan Avenue.