New rainbow crosswalk in Courtenay cleaned up prior to unveiling 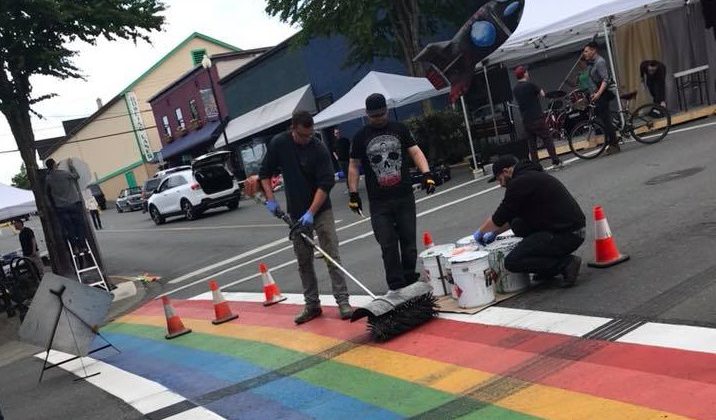 COURTENAY, B.C- Black streaks in downtown Courtenay are getting scrubbed off the new rainbow crosswalk this afternoon.

The crosswalk had been vandalized within 24 hours of completion, after being laid down at the intersection of Duncan Avenue and 5th Street.

The marks were across the westbound lane of 5th Street as it passes Duncan, leading into the intersection and fading up the slope from the crosswalk.

According to Sarah Larson, who works in the downtown core, a loud squeal was heard in the area around 5:30 p.m. on Friday evening.

After she came outside to see what had happened, the two large black marks were visible, and bystanders told her that a large white truck had been the vehicle responsible.

Reaction to the news of the burnout has been mixed, with residents of the area either angered by the action or speaking against the crosswalk’s existence in the first place.

One company, however, appears to have taken the initiative in cleaning up the marks.

According to a post from the Facebook account of the Downtown Courtenay Business Improvement Association, Infinite Road Marking Ltd has volunteered time and equipment to clean the marks off the crosswalk.

At least five employees of the company are on-site, working on the installation.

The Elevate the Intersection event, meant to celebrate the crosswalk, is scheduled for tonight, starting at 7:00 p.m. at the corner of 5th Street and Duncan Avenue.