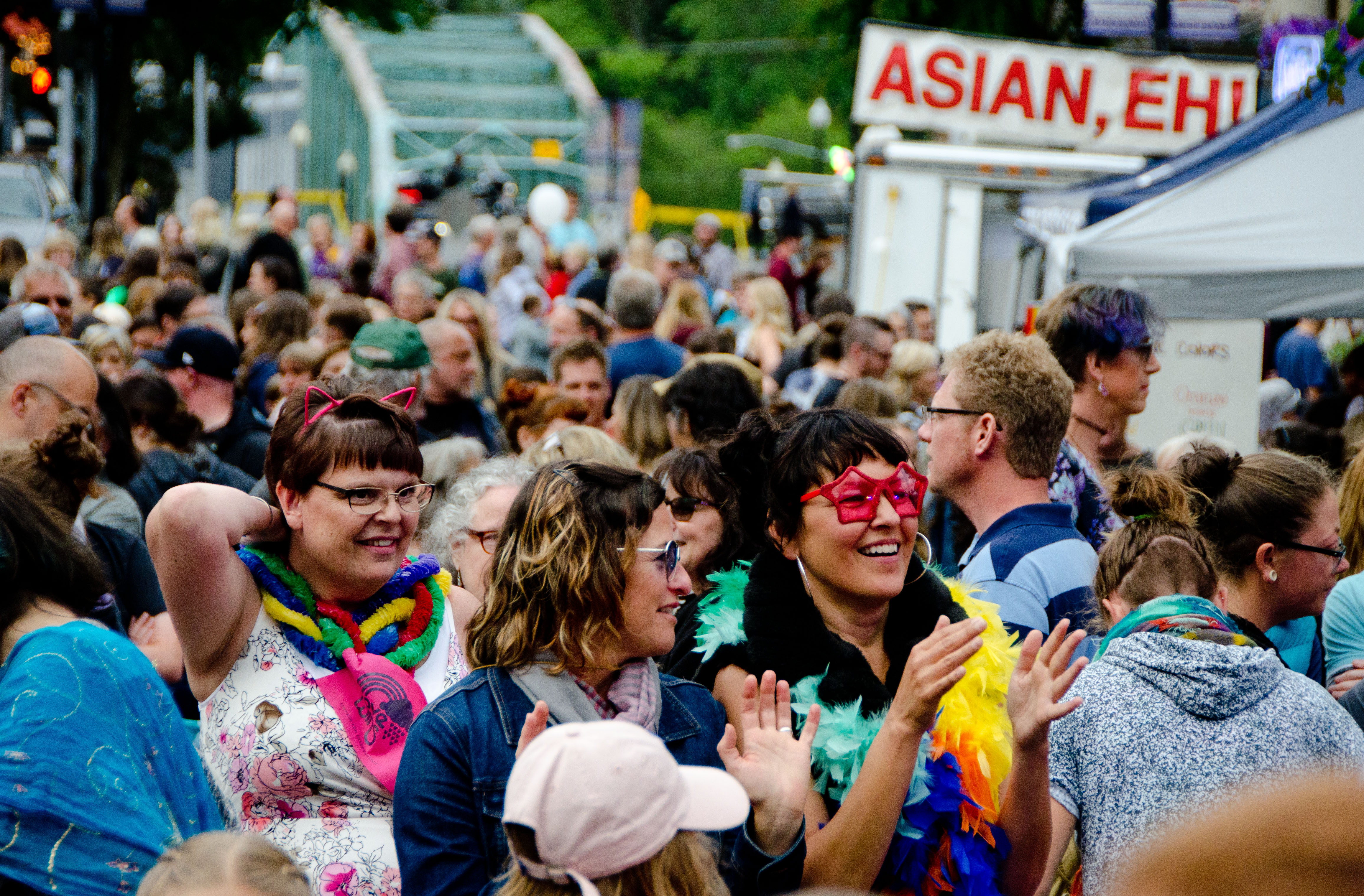 The event kicked off around 7 p.m. in the middle of the downtown area, at the intersection of Duncan Avenue and 5th Street.

Scheduled to run till 11 p.m., it included performances from theatre students in the Valley, the Kumugwe Dancers, Hip Hop Coalition, Just in Time Choirs, Arcana Dea Dance, Music by cozy, Temple Fusion Bellydance and others, with a dance until 11 p.m.

Festivities began with a pop-up choir performance of True Colours, in the middle of Duncan and 5th.

The new rainbow crosswalk, which was the centrepiece of the event, had been vandalized with skidmarks the evening before. It was cleaned by volunteers before Elevate the Intersection began.

Infinite Road Marking Ltd volunteered the time and equipment to clean the marks off the crosswalk. According to James Steck, a board member of Comox Valley Pride, the support of the community was appreciated.

“You’re going to have those people, even big cities like Vancouver have people with skidmarks. You know what? The community comes together. The guys that painted it, it wasn’t even the city that sent them, they just came down on their own and re-painted it today, and had it painted and dried just in time for us to open.”

Courtenay city councillor Rebecca Lennox was present for the event, and said she unfortunately wasn’t totally shocked by the vandalism.

“That being said, having grown up here, I was harassed most of my life for being alternative, as it were, and I feel like we have come a long way,” said Lennox.

“So hopefully, although there is always going to be a few bad apples, I do feel that the general feeling in town is more inclusive than it used to be.”

Lennox said it was satisfying to have the crosswalk down. As for any plans by the city to deal with potential vandalism, she said they’d had to “wait and see”.

“Hopefully, it’ll be one of those things that people run out of interest, and vandalizing it,” said Lennox.

“But I also feel like there was a lot of community support for this, so we will do whatever we need to to protect our investments.”

She also had a shout out for those who had helped make it safer for the LGBTQ community.

“Courtenay has been a very straight town for a very long time,” said Lennox.

“I really hope that we can move forward into a new generation of love and understanding for everyone.”

Image Caption: Attendee’s of the Elevate the Intersection event dance in the street in downtown Courtenay on June 2nd, 2018. Photo by James Wood/98.9 The Goat/Vista Radio