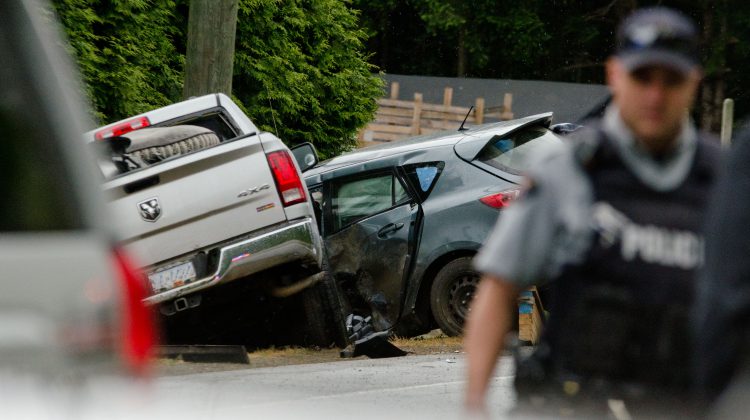 BLACK CREEK, B.C- A man killed yesterday in an Old Island Highway crash was a resident of Courtenay, according to police.

The crash was around 1:30 p.m., just north of the Black Creek Community Church, and shut down the highway in both directions as police investigated the scene.

Sgt. Craig Blanchard of the RCMP’s North Island traffic division said that a northbound Mazda 3 had pulled to the side of the road when a Dodge Ram pickup was following.

The Mazda made a U-turn and was struck by the pickup.

Both vehicles went into the ditch, and power lines fell down onto the road after the vehicles struck a power pole.

The driver of the Mazda was deceased at the scene. A clear cause for the crash is not yet known by police.

The deceased man is believed to be a Courtenay resident, who was in his late 70’s or early 80’s, according to Blanchard. The male driver of the truck was taken to hospital with minor injuries.

The investigation into the crash is ongoing, and charges have not yet been laid.

“As the summer is getting here, just be careful when you’re driving,” said Blanchard.

“Keep your speed to the speed limits, pay attention when you’re turning, and wear your seat belt.”