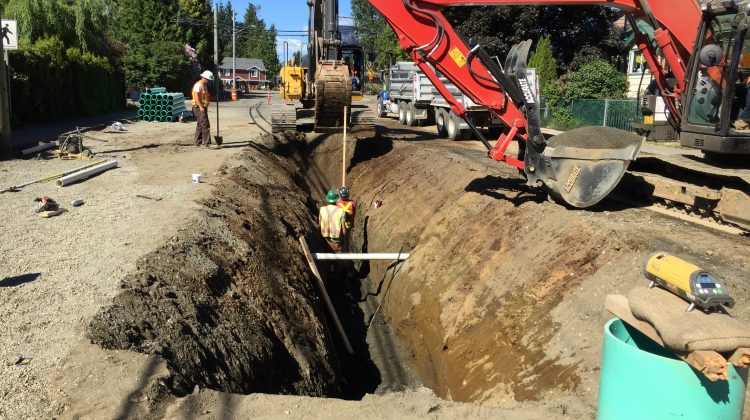 Crews on site of the Complete Streets Project in Courtenay. Photo courtesy the City of Courtenay.

COURTENAY, B.C. – Progress is being made on the City of Courtenay’s Complete Streets Project.

A notice from the city stated that the majority of stormwater and sewer mains on 5th Street between Harmston and Menzies have been replaced with new larger capacity mains and manholes.

This new infrastructure replaces pipes that have been in place for 60 years. The city said the new mains will provide greater durability and capacity for the system.

Properties will be connected to the new system over the next few weeks.

The focus now shifts over to upgrading the water system with the installation of a new watermain between Harmston and Menzies Avenue.

Following the Canada Day long weekend, the city said construction will move east to the block between Fitzgerald and Harmston Avenues, with work ongoing throughout the summer.

The city said that property owners will be notified of water service interruptions at least three days in advance.

Later on in the summer, once the underground work is completed between Fitzgerald and Menzies, the infrastructure work will move above-ground.

Some of this work includes installing two new bike lanes, improved accessibility for strollers, scooters and wheelchairs, parking between Fitzgerald and Harmston and alternating parking and rain gardens throughout the rest of the corridor.

Further details on the project can be found via the City of Courtenay’s website.