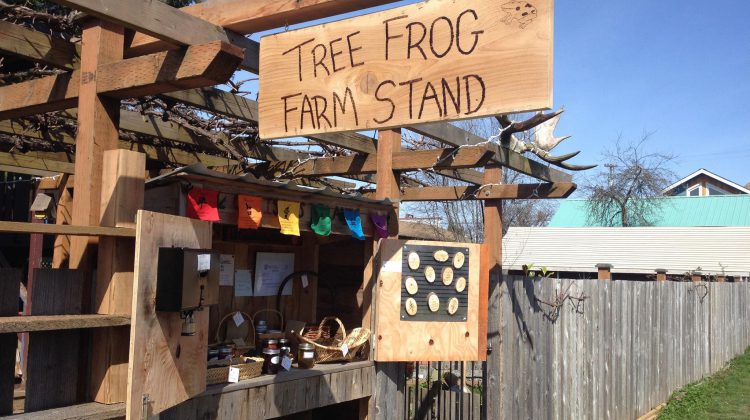 A submitted photo of the stall.

CUMBERLAND, B.C- A Cumberland woman has to make a new banner, after her farm stand was robbed this week.

Christine Patricia Cole runs the Tree Frog Farm Stand in the village, attached to the outside of her home near the community’s downtown. The installation resembles a free library stand, while including items such as jams and magnets for sale.

A banner made up of different Chinese characters on coloured paper used to adorn the top of the box, but a pair of robberies has led to jams going missing and the banner being torn down.

According to Cole, the first robbery took place on the evening of June 1. She had left the bottom sections of the stand open, because the locked-up sections were already too full.

The following day, she found that someone had taken the products that weren’t locked, with around $50 worth of merchandise removed.

On June 7, she found that the banner overtop of the stall had been taken as well, after someone had taken the time to remove the screws.

“Everybody seems upset about it,” said Cole.

“Everybody loves the little stands, I think they’re quite cute around Cumberland here, there’s a few of them. Everybody enjoys it, especially evening walks, and morning walks.”

She is now planning to possibly re-make the banner, with more screws the second time around. She also might invest in a camera to watch the stand.

The incidents have not yet been reported to police.