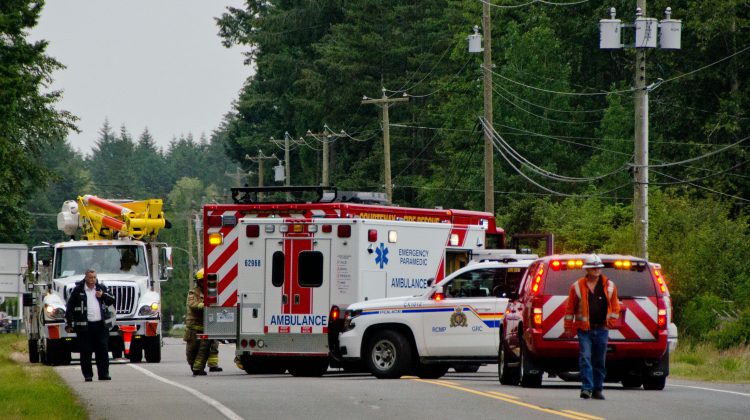 First responders are pictured at the scene of a crash along the Old Island Highway that shut down the route briefly on Tuesday morning. Photo by James Wood/98.9 The Goat/Vista Radio

COURTENAY, B.C. – A woman has been sent to hospital after a mid-morning collision on the Old Island Highway.

The woman collided with a power pole.

“The power pole was just a support pole, so there was no actual live power to it,” Bardonnex explained.

He noted that the cable supporting the pole was strewn across the road.

“We just cut the pole up and then dragged the cable off to clear the road.”

Multiple emergency crews responded, and the incident lead to a brief closure between Merville and Coleman Roads. As of 11:30 a.m., traffic control personnel remained on scene.

Bardonnex said that fortunately, the elderly woman did not suffer any major injuries.

Although he could not say what exactly caused the crash, he did have some advice for drivers.

“Just be aware, and keep your focus on the road.”