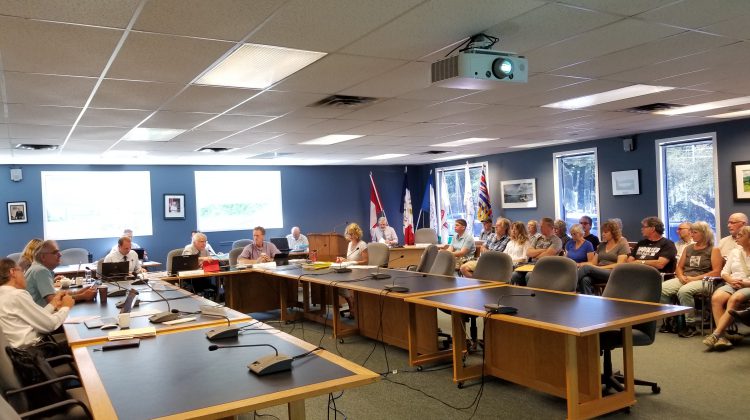 The CVRD board getting set to discuss the Merville water bottling proposal on Monday, June 18 2018. Photo by Justin Goulet/98.9 The Goat/Vista Radio

COURTENAY, B.C. – The Comox Valley Regional District’s board has decided to move the discussion of a proposed bottling operation in Merville to the public.

At its June 18 meeting, the board heard from applicant Christopher Scott Mackenzie. The Merville man and his wife are looking to extract up to 10,000 litres of ground water per day from their family well along Sackville Road.

Staff had recommended that the rezoning permit be denied on the project, based on negative feedback from the K’omoks First Nation and the public, including members of a group opposed to the proposal called the Merville Water Guardians.

Electoral Area A Director Bruce Jolliffe was in favour of staff’s recommendation. However, director Edwin Grieve made a motion to move the matter to a public hearing. Director Rod Nichol, who served as acting board chair during the discussion, seconded the motion.

“It’s a very contentious situation, a lot of emotion, but the thing in my mind, is that you have the right to be heard in public,” Nichol said.

“The applicant is concerned about the protection of his process. I think it’s imperative that we allow the entire process to move forward, (which includes) a public hearing,” he said, when making the motion.

“I personally know there are a great many people who have not had a chance to speak on this matter that could come forward in a public hearing.”

Following the meeting, MyComoxValleyNow.com spoke with Bruce Gibbons, the founder of the Merville Water Guardians.

He voiced his displeasure on Monday’s resolution.

“We thought this was pretty much a done deal, that they would deny this. All recommendations from the staff and the committees were for denial,” he said.

“We are definitely encouraging all of our supporters and anyone that will listen to us to get out there and voice their opinion at the public hearing.”

Gibbons said the group has two petitions circulating the community.
The first is to deny the rezoning and to include protection of ground water in the CVRD’s regional growth strategy.

The second petition was launched on Saturday, June 16 at the Comox Valley Farmer’s Market.

“It’ s a petition to the provincial government to asking them to stop issuing licenses to extract groundwater and bottle and sell it, in all BC aquifers,” he explained.

“We’re starting to gather momentum on that, and we want to take it to the BC government and just protect our ground water, period.”

He said so far, that second petition has 165 signatures.

Gibbons noted they’re going to set up public events to gain more signatures with the goal of protecting groundwater.

“We’re gonna get as many as we can, and then at some point, we’re going to decide on the timing, and get that up to the province, and let them know what the people think about what they’re doing with our groundwater,” he said.

A date for the public hearing has yet to be set.