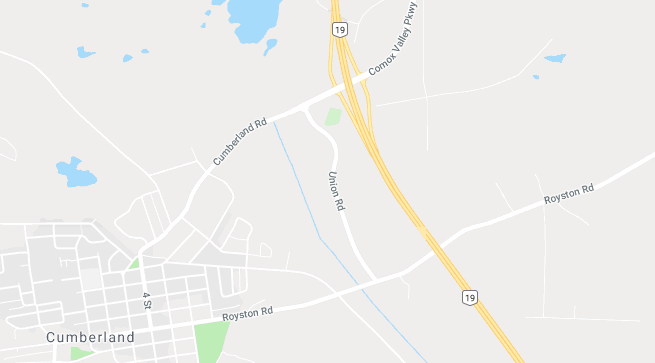 A section of Highway 19 is being renamed to honour a late Vancouver Island activist. Image sourced from Google Maps.

CUMBERLAND, B.C. – A section of Highway 19 on Vancouver Island has been dedicated to a Comox Valley labour leader and historical figure.

New highway signs have been put up near the entrance into Cumberland honouring Albert “Ginger” Goodwin, renaming that patch of highway as Ginger Goodwin Way.

Mid Island-Pacific Rim MLA Scott Fraser unveiled the signs at a ceremony as part of Miners Memorial Weekend in the village this morning, on behalf of North Island MLA and Minister of Transportation and Infrastructure, Claire Trevena.

“As we approach the centennial of his (Goodwin) death, it is very fitting that we dedicate Highway 19 near Cumberland to Ginger Goodwin, who was one of the most prominent figures in our labour history, and fought for rights and protection of workers,” said Trevena, in a release from the province.

In 1996, similar signs were installed to coincide with the opening of the Inland Island Highway to the Comox Valley, but were removed in 2001.

“Ginger Goodwin was a pioneer in the B.C. labour movement, and a passionate advocate for health and safety in the workplace, and I am very pleased government will honour his memory by reinstating Ginger Goodwin Way along approximately 12 kilometres of Highway 19,” said Fraser.

Five new signs have also been installed by the Ministry of Transportation and Infrastructure. They will direct travellers to the Cumberland Cemetery, where the Ginger Goodwin Stop of Interest sign is located.