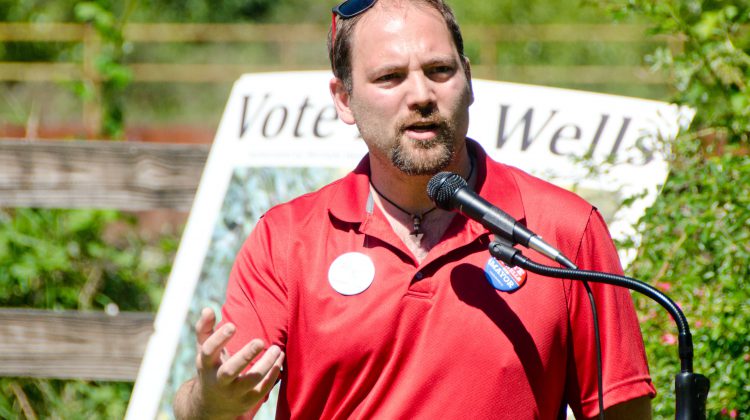 Wells during his campaign announcement speech on June 23, 2018. Photo by James Wood/98.9 The Goat/Vista Radio

COURTENAY, B.C. – Bob Wells wants to be the next mayor of Courtenay.

The City of Courtenay councillor held his official campaign launch on Saturday afternoon at Locals Restaurant, addressing a crowd of supporters.

Wells announced that he was running for office about two months ago.

He said when he initially announced his plans; he knew it would be a while before going “full steam ahead”. He said there were still some city projects to work on.

Wells noted that a vacation with his wife, and some reflection with his family, helped put things in motion leading up to Saturday’s official campaign launch event.

He listed some of the important projects council has worked on over the last term, including the Braidwood housing initiative, work with Habitat for Humanity and the 46 unit supportive housing project on 8th Street.

“We got all of these things that are in motion, and we are working, I think, far better than we were four years ago,” he said.

Speaking with MyComoxValleyNow.com, Wells summed up his goal as a mayoral candidate. 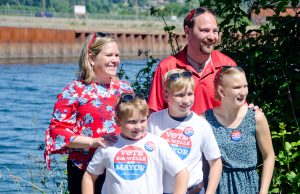 Wells with his family during his campaign launch on June 23, 2018. Photo by James Wood/98.9 The Goat/Vista Radio

“My goal is to create a culture of collaboration and cooperation, so that we can take all the successes, all that momentum, and accomplish even more in the next four years,” he said.

Wells noted that one of the central issues of the campaign would be housing. However, he said that was not the only topic of discussion.

“It’s certainly something that I’ve always held dear to my heart but beyond that I think fiscal responsibility is another big thing,” he said.

“Being a small business owner (with My Tech Guys) and knowing how things work in terms of these large infrastructure projects, having to get grants from the provincial and federal governments, those are the types of things that are going to allow us to succeed in some of those larger projects, and that’s where I think my expertise and proven experience is going to come in.”

So far, Wells is running against fellow councillors David Frisch and Erik Eriksson. Current Mayor Larry Jangula has yet to announce whether or not he will run for re-election.

Wells commented on how he is going to separate himself from the other candidates.

“Right off the bat, it really comes down to that proven leadership, and the experience,” he said, pointing out his experience and success in the business world, as well as in the world of politics.

“I think I’ve been very successful as a politician over the last four years, whether it’s dealing with our water crisis from the boil waters to the drought, we were really thrown into the deep end of the pool, so to speak, and I think I fared extremely well into those circumstances. Not only fared well, but I’ve been able to create that culture of collaboration in the groups that I’ve worked in.”

He noted that this won’t be a “polarized election” where everyone is spouting insults at each other, but the candidates are “sitting down and working on being focused on the outcomes,” and focused on what will help Courtenay thrive as a city.

“We’ve got a lot of information now,” he said.

“We’ve got these transportation plans, we’ve got other things coming into us that are really setting us up to move into the future.” 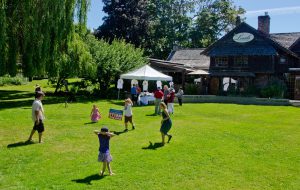 Attendees of the announcement stand on the grass at Locals after the speech. Photo by James Wood/98.9 The Goat/Vista Radio

He said he’s very proud of the work that’s been done over the last four years, but there is still more to do for the community.

“I think we’ve done really well, but the potential to do even better is there and I think I’m the person to do it,” he told MyComoxValleyNow.com.

Wells said he’s planning to host some open forums and chat one-on-one with residents. Over the summer, he plans to work on events like Vancouver Island MusicFest and spend time with his family.

“I just want to make sure everybody knows this is something I’m taking very seriously, and I’m open for discussion. Any events that we have will be posted on Facebook and we’re inviting the community to come and participate,” he said.

Wells thanked residents for the support he and council have received over the last four years.