Transplant Games athlete thankful for life he’s been given 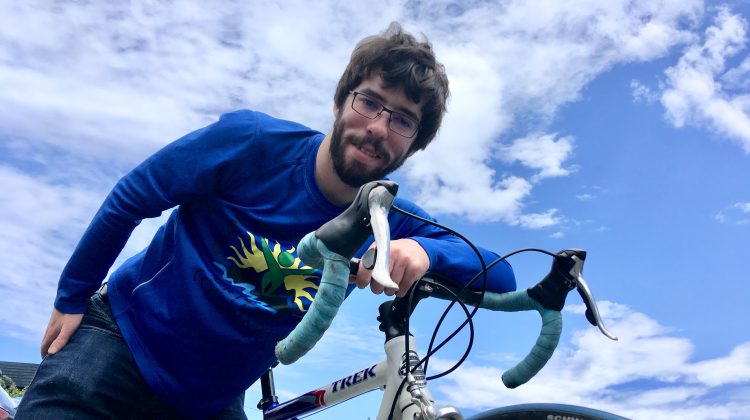 Robbie Thompson is a heart transplant recipient who is competing in cycling and swimming at the upcoming Canadian Transplant Games in Vancouver. Photo by Troy Landreville/98.9 The Goat/Vista Radio

The 20-year-old Comox Valley resident had two life-saving heart transplants before he was six years old.

The first came at 18 months old, the second when he was five.

“I was diagnosed with a very long and complicated-sounding disease called idiopathic dilated cardiomyopathy,” Thompson told MyComoxValley.com, as he gears up to compete in next week’s Canadian Transplant Games, a multi-sport event involving transplant recipients and organ donors/donor families.

Thompson’s condition causes the left side of the heart to be too large to close properly, making it unable to properly pump blood.

Both Thompson’s transplants had his family move temporarily to Toronto so he could receive medical care; and both came from donors about the same age that Thompson was at the time.

“Both times (the donors) had to be similar ages, but with my first transplant, a lot of other children my age who needed transplants got their organ the same time I did, so there was this immense feeling that went around that one child had died and because their parents had chosen to allow organ donation, they managed to save a lot of other children’s lives, including my own,” Thompson said.

Unfortunately, Thompson’s body rejected the first heart when he was four, resulting in a second transplant a year later.

During these times the Comox Valley community hosted several fundraisers and promotions to help Thompson’s family so they could keep their home and livelihood.

Thompson is a veteran of the games, despite being limited physically because he doesn’t have nerve connections to his heart due to the transplants.

And while he loves the competition (this year he is competing in the cycling and swimming events), Thompson’s motivation to attend the games runs much deeper.

“Being able to celebrate the fact you are alive with other people who have gone through the same thing, and also promoting organ donation and what it can do for people,” Thompson said.

He wouldn’t be alive if not for the actions of the families who decided to donate their children’s organs.

With this in mind, Thompson urges others to become organ donors.

“You can go right to Service BC and sign up right on the spot if you wish,” he said. “It’s fairly easy and you can do it online, too.”

Looking ahead to the games happening July 2 to 7 in Vancouver, Thompson looks forward to catching up with a few familiar faces.

“It’s fun to compete and everything but the main reason everybody does it is to go out and see each other and celebrate the life they’ve been given.”