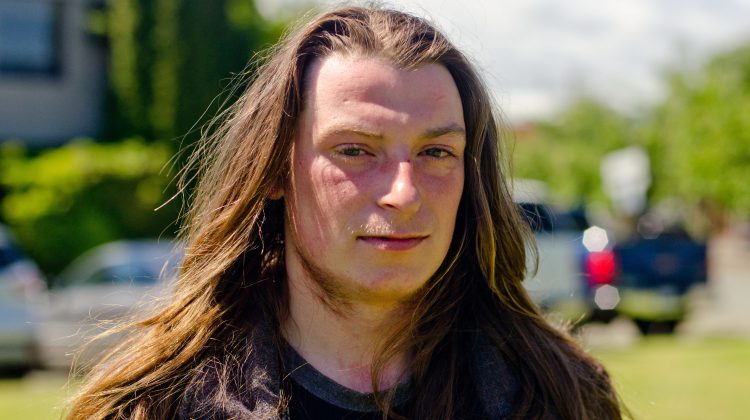 Brody Fullerton is pictured in downtown Courtenay on June 15, 2018. Photo by James Wood/98.9 The Goat/Vista Radio

Fullerton will be familiar to residents of the Comox Valley, after helping to save a young woman’s life along Comox Road in 2013. After Molly Burton was struck in a hit and run and left seriously injured in the undergrowth along the road, it was Fullerton who responded to her cries for help, calling 911 after finding her in the dark.

After the accident, Fullerton was celebrated as a hero for his actions, with interviews on CTV and meetings with Molly’s family. After the initial burst of attention, however, Fullerton’s life went back to it’s normal, chaotic course.

Residents of the Comox Valley may now see Fullerton in downtown Courtenay, attending the soup kitchen offered at St. Georges United, sitting outside the library, or biking through the city. By his own admission, Fullerton has issues with substance abuse, and struggles with finding work and a healthy place to live.

He first came to the Valley at eight years old, after being born in Powell River. He told the MyComoxValleyNow.com newsroom that his mother was in a wheelchair, and his father worked all the time. He and his little sister were alone with their mother “for the most part”, after he came home from school.

Fullerton went through the local school system after his arrival, starting at Union Bay Elementary. From there, he moved on to Sandwick Alternate School, due to troubles with other children, who he said “were bugging him”, ending up at Cumberland Junior, where trouble followed.

According to him, he would head to St. Josephs Hospital in Comox after school every day, to visit his mother, who suffered from MS.

His final school was Senior Alternate, next to the old Safeway, where he attended until the age of 15.

That was when his mother, long ill, passed away.

“She passed away, and I haven’t been back to school since,” said Fullerton.

“I just finished Grade 7, never got my Grade 8 yet. Been all f**cked up since then.”

On the night of Molly’s incident, Fullerton was 21 years old. He indicated by that point, he had been going down a bad path, drinking and smoking, and had come into an inheritance following the passing of his grandparents. He used the inheritance to buy a boat, a truck, and “mess around” with dirtbikes.

He also used the money to purchase alcohol, and had been sailing up the Courtenay River that same day when he and a friend ran into boat troubles, eventually tying up at a small dock off the Courtenay Airpark.

“It was just a fluke, how all that fell into place, that night,” said Fullerton.

“We ended up with a rope around the prop, stuck in the river, and then this boat towed me to that little dock, tied up there for a few days. That night, I was sitting there on the boat. I had a couple cases of beer, having a few drinks. My buddy, he was on the boat too, that night. He was pretty drunk, and he was just going to sleep. That’s when I heard Molly screaming.”

According to Fullerton, he had broken his cellphone the day before, so he grabbed his companion’s phone and eventually biked over to where he had heard Molly’s voice.

The whole time, he had been worried that the calls for help were a trick, in order for people who had heard about his inheritance to rob him.

According to Leslie Wells, Molly’s mother, the family first met Fullerton in person when he came to Molly’s 25th birthday party.

They were glad to have him at the event, and have had intermittent contact with him ever since. They’ve taken him out for meals, and given him rides around town, and learned about his life.

Wells said she hadn’t wanted to cross any lines with Fullerton, but wanted to help him after what he had done for her daughter. A move to set him up with a job didn’t work out, and an offer of help with government paperwork to get disability assistance wasn’t “taken up on”.

They eventually cut off contact after communication between Fullerton and her daughter took a turn for the worse. She believes that Fullerton may have a mental health condition, and a physical disability which is holding him back in life.

“I think there was a little blip where he did a great thing, but then he went back to his normal life, heavily using alcohol and drugs,” said Wells.

“I don’t think it’s made it worse for him. Yes, he lost his mooring, but I suspect that may have been a matter of time anyway, till the city found his boat there. It just really sucked that it happened.”

Wells knew of restaurants and coffeeshops who had been giving him free meals, but the practice didn’t last, which she believed might have been affected by Fullerton’s addictions.

However, when she spoke about the “core” of Fullerton, she teared up.

“He is a really caring person, he struggles, and there are all these other things that prevent him from moving forward, and having a terrific life.”

“I think of Brody as an angel, in his spirit.”

Wells still wants to find a way to help Fullerton.

After helping Molly, Fullerton’s life continued much as it had before. He eventually lost his boat, after being told to move it by municipal authourities. As he was unable to pay mooring fees, the vessel eventually sunk, and a second boat he had purchased was broken into and stripped.

“It’s just one thing after another, trying to get ahead but getting kicked down,” said Fullerton.

“I drink a lot too, and that’s a big problem to add to things too.”

He’s now 25, and still believes he did the right thing that night.

“There is always a right thing to do, and it’s just, I wasn’t prepared for what would happen afterwards,” said Fullerton.

“I was in the bar one day, and I went in to the bar to just have a good night, and some a**hole in the bar, he told me I should have left her to die. Started beaking off. There’s a bar I’m not allowed in. Punched him in the mouth, now I’m not allowed in that place.”

When asked about what help he thinks he needs, Fullerton indicated he is hoping to live in a better place. While he maintains a rental in a west-end Courtenay trailer park, he primarily lives with his girlfriend due to what he described as a rat problem and lack of hot water in the trailer.

“I’d like to get a place to live, to be indoors, a proper place,” said Fullerton.

“It’s hard to find a place here, everything is so expensive. I’m lookingg on Craigslist, people want $900 or a thousand bucks for a little one bedroom bachelor suite.”

He also wants to quit drinking and get his driver’s license, though he was leery of heading to a treatment centre for help. Above all, he wanted the community to know that he was a good person.

“I’m going through a rough time in life,” said Fullerton.

“I might be getting drunk and falling down here and there, but I’m not at all a bad person. People, the way they look at me and stuff, I don’t like it. I just get sick of society. There’s times I just want to pack up and move out to the bush.”

In September of 2014, the teen driver who hit Molly was given a conditional sentence of two years and did not do any jail time.

They also received three months house arrest, 200 hours of community service, nine months with a curfew of 10pm to 6am, and a five-year driving ban.