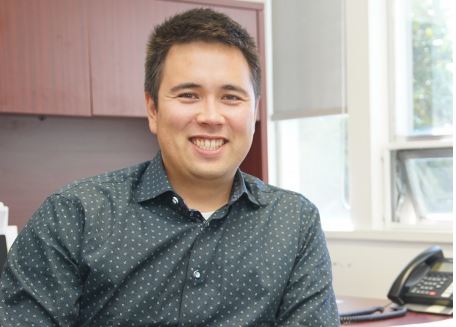 After being educated and beginning his accounting career in BC’s Interior, Langenmaier has returned to his roots on the coast.

“I grew up in Courtenay,” he said.

“Growing up in such a place you do not realize the sheer beauty and recreation opportunities at your fingertips. When you are young you think it is normal to have numerous beaches to choose from, or river swimming holes, or lakes.”

After high school, Langenmaier heard the call of the mountain and decided to take a winter to ski. He wanted to experience big mountains and rugged terrain.

“I spent a season skiing Kicking Horse Mountain in Golden. It turned out to be one of the worst snow years that B.C. has seen, however, there was still good skiing to be had.”

After his season skiing, Langenmaier attended Thompson Rivers University in Kamloops, where he earned his Bachelor of Business Administration degree with a major in accounting. When he started his degree, Thompson Rivers was the newest university in BC, and over the course of his education, he saw the university grow.

“When I visit TRU I am still amazed at how much more it has grown since I left,” Langenmaier said.

“I would highly recommend TRU to any students looking for post-secondary education. I loved the small class size and how affordable the tuition was. Furthermore, the cost of living, with great biking and skiing close by, could not be beat.”

Through the summers during university Langenmaier worked as a forest firefighter, which took him across parts of BC and Alberta.

“One of my highlights was working in Banff National Park, cutting a fire break for a planned controlled burn,” he said. “Not many people can say they have cut trees down in a national park legally.”

After university, Langenmaier moved north to Dawson Creek, which is the capital of the Peace River country and Mile Zero of the Alaska highway.

Part of his responsibility was auditing the finances of a few municipalities and school districts, as well as for-profit and not-for-profit entities.

“Working as an auditor was my first exposure to municipal finance,” Langenmaier said. “Call me crazy but this is when I was first interested in local government. I saw the effect local governments have on a community and I wanted to be a part of making great communities.”

Langenmaier segued into municipal accounting when he decided he did not want to look at financial year-ends and tax returns for the rest of his life.

A part-time job opportunity opened up in the Village of Pouce Coupe. It worked really well because Langenmaier and his wife had their first child, so he could divide time parenting and working in an interesting role.

The part time position turned into fulltime work fairly quickly with the passing of the Chief Administrative Officer (CAO). Langenmaier was thrust into covering both the CAO and CFO roles. It was a big learning curve, understanding how a municipality works.

“I had never paid attention to municipal politics before,” Langenmaier said.

It was a really good experience, though, because he was able to work with an interim CAO. “I think that was the best learning opportunity that I had. It gave me a broader understanding of how municipalities work.”

He was in Pouce Coupe for two years. An opportunity then came up with the City of Dawson Creek. They were planning a succession for their CFO and wanted to bring in someone to transition into the role.

“Pouce Couple was a good experience, but I could learn so much more with an experienced CFO, working in a bigger centre,” Langenmaier said. “It was really neat working there. While in a small municipality you are responsible for everything, in a bigger centre, there are all sorts of new challenges, there is more depth of information. Because it’s bigger, more people are affected in more different ways. However, you are faced with the same challenges: how do you deal with aging infrastructure, keep taxes reasonable and provide good services?”

There were a number of things that led to the decision to leave Dawson Creek and come to Powell River.

Langenmaier wanted to be closer to family on the coast. Lifestyle was also a big consideration. The two communities were a similar size and he enjoys life in a small city.

Langenmaier came to Powell River just as the 2018 budget was being concluded.

He now has several months before the budget process begins again, affording him the opportunity to become well familiarized with the systems in place in Powell River. It’s an interesting time because a new City Council will be elected in October, so priorities can change.

Langenmaier said in the lead-up to the next budget, it’s his goal to leverage all of the efficiencies that can be made in the finance department, in support of the other City departments. “Instead of working harder, let’s work smarter and use technology to our advantage,” he said.

The financial services department is in good shape in Powell River, Langenmaier said.

Staff have weathered the changing of CFOs very well, which has “made them strong. People have been in their roles for a number of years. They have nearly all of the answers and are willing to find them out if they don’t.”

Langenmaier said Powell River is a wonderful place and he’s excited for the oceans, rivers, lakes and trails, similar to the Comox Valley where he grew up. He is hoping he can give his children the same opportunity that his parents gave him.

“It’s a good career move and a good life move,” he said