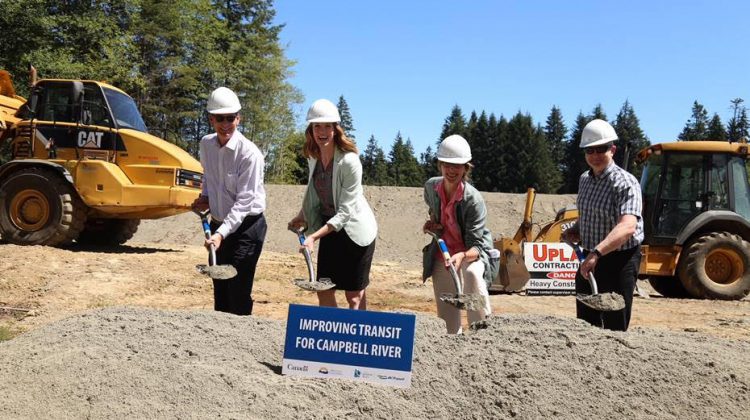 CAMPBELL RIVER, B.C- The city of Campbell River celebrated last week at the ground-breaking ceremony for a new transit building.

City officials and B.C transit personnel gathered on Thursday to celebrate the beginning of construction for the new Campbell River Transit and Operations Facility.

The facility, located at 1235 Evergreen Road, will include parking for 42 buses, with the ability to expand in the future. The site will also have three vehicle maintenance bays, administrative space and onsite bus washing and fueling facilities.

Amarjeet Sohi, Minister of Infrastructure and Communities, said the facility will be beneficial both for the economically and in meeting a need for expansion.

“The Government of Canada recognizes how important investing in public transit infrastructure is to building strong sustainable communities that can accommodate future growth,” said Sohi.

“We are pleased to see this project getting under way in Campbell River, which will not only help meet growing demand, but support better daily transit services for users and help lay the groundwork for economic development and middle-class job creation.”

In addition to the new facility, the building is designed to accommodate things like Compressed Natural Gas (CNG) and electric buses, should there be a need in the future.

The project, budgeted at $15 million, was first announced in 2016 as part of the Public Transit Infrastructure Fund (PTIF). The federal and provincial governments are providing 83% of construction costs, the remaining will be covered by the City of Campbell River.

The province and the city will shoulder the costs of land and other expenses that are not eligible for PTIF funding.

Claire Trevena, Minister of Transportation and Infrastructure, and Mayor of Campbell River, Andy Adams, also made an appearance for the ground-breaking.

“This new transit facility will be a welcome addition to the community of Campbell River and a positive sign that public transit is rising in popularity,” said Trevena.

“Investing in transit services that really work for people is key to making the shift to green transportation as we work to reduce our impact on the environment for generations to come.”

Tender packages have been released for site preparation and servicing, with more to follow in the coming months. The date for project completion is Winter 2019.