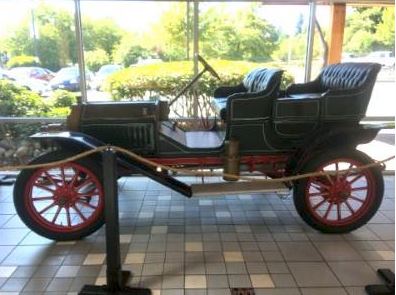 COMOX, B.C. – The Town of Comox’s vintage vehicle has a new home.

And it’s in the comfy confines of the Comox Centre Mall.

The town’s 1909 McLaughlin Buick will now be on permanent display at the mall.

The 118-year-old car was originally owned by Thomas Knight, son of John Knight, and one of the first pioneers to settle in the Comox Valley.

Thomas would hire out the car as a taxi to Robert Filberg, touring visiting officials and socialites to various locations around the valley.

After it was purchased in 1945 by an antique car collector, the McLaughlin Buick was displayed in the BC Transportation Museum in Surrey.

With the closure of the museum in the early ‘90s, and appreciating the car’s history, the McLaughlin Buick was donated to the Town of Comox.

“Working with one of the new partners of the Comox Centre Mall, Mr. David Coon, the town was in a position to once again, display this century old Buick for all to enjoy,” Mayor Paul Ives said. “Our sincere thanks to the owners of Crown Isle who, in 1999 following restoration of the vehicle, displayed the McLaughlin Buick in the Crown Isle Car Museum.”