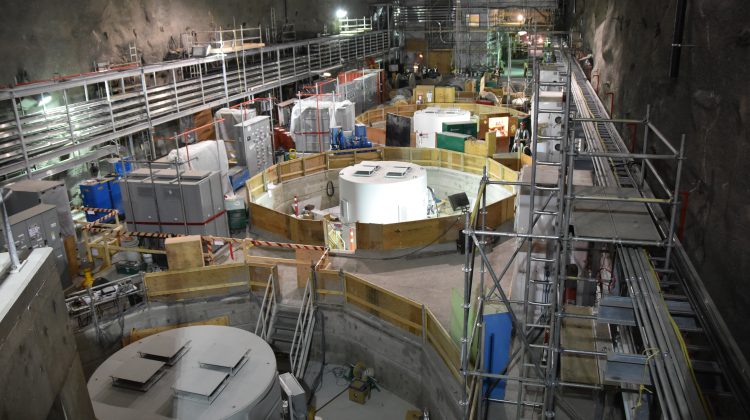 The massive John Hart underground powerhouse with the three turbines/generators and Generator 3 in the foreground, and the office complex and main access tunnel in the background. Photo courtesy Stephen Watson.

CAMPBELL RIVER, B.C. – The first of three new turbines and generators at the John Hart dam is now online.

“We had that date of July 21st, 2018 as the target for the first turbine generator to go into service and we just made that date,” said BC Hydro’s Stephen Watson.

“It’s the first of three generators that are now available to BC Hydro to utilize. The next two will come online later on this summer and October. October is the timeline where the new facility is to be commissioned so it’s on schedule and on budget.” 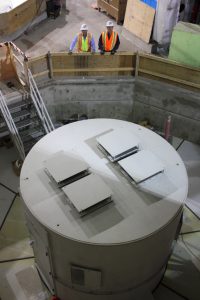 Paul Sawyer from InPower BC, and Stephen Watson from BC Hydro, stand beside the newly commissioned John Hart Generator 3. Photo courtesy Stephen Watson.

The project cost is over $1-billion. In April, water was introduced into the 2.2 kilometres of underground tunnels at the John Hart site.

In May, new valves on the downstream side of the John Hart dam, and a new water bypass facility, were put into service.

The new underground powerhouse will take over from the older six-unit generator powerhouse. The new facility will result in a near 10 per cent increase in power output, while using the same amount of water flow.

Watson said it’s been a “massive project”, with the excavation of rocks to create the tunnels and the underground powerhouse cavern.

“We peaked at about 500 people working at the site last June,” he said.

“We’re now down to maybe a few hundred as we move towards the end, but still a lot of focus, with a big focus on safety. We’ve achieved 3.2 million person hours of work without a loss of time accident.”

On September 16th, BC Hydro and contractor InPower BC will co-host a sold out community site event and allow 1,240 people to see the underground powerhouse.