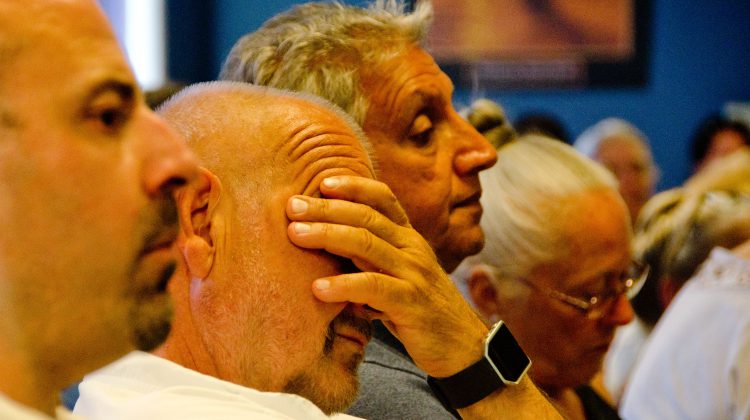 3l’s owner David Dutcyvich is pictured during the CVRD board meeting on July 24th, 2018. Photo by James Wood/98.9 The Goat/Vista Radio

COURTENAY, B.C- A contentious development near the Stotan Falls will be going through a long consultation process.

During a meeting of the Comox Valley Regional District (CVRD) board of directors on Tuesday afternoon, the question of whether or not an application by 3L Developments Inc. to change the district’s growth plans in order to create a new “settlement node” near the falls would go through a “standard” or “minor” amendment process was voted on.

This was the third time the question came to the CVRD, and the first time a decision made on it would be binding. The first two votes led to the CVRD initially considering the amendment as minor, though the board of directors would have the final say.

3L Developments Inc has been trying to build the development, which in it’s current plan would cover 550 acres in the area, close to the fork of the Browns and Puntledge rivers.

The site would have 740 homes, a commercial centre, and a self-contained water and sewage system.

After a series of delegates presented to the board on the topic, with a total of eight people in favour of a minor amendment and four against, the directors were asked to vote.

With each director holding one vote, the possibility of a minor amendment was defeated after only directors Larry Jangula, Manno Theos, and Ken Grant voted in favour. The rest of the group voted against.

“The Regional Growth Strategy is the guiding document for sustainable development in the Comox Valley and great care will be taken to ensure its social, economic and environmental values are applied during our decision process,” said board chair, Bruce Jolliffe, in a release issued after the vote.

“As with any application, we are committed to a fair and transparent review process.”

Joliffe declined to answer questions after the meeting. However, Jangula discussed the results, voicing frustration at the outcome.

“Three of the people today switched their vote from a week ago on exactly the same thing,” said Jangula.

“I find that quite amazing, how a week ago they were fine, with going with minor, and now all of a sudden because some people came (the speakers) because of, I think the psychological pressure of all the opposed people, they changed their minds. That’s hardly good, strong leadership, in my opinion.”

Jangula was unsure of how 3L would react to the decision by the CVRD, citing the company’s repeated offer of creating a public park in the falls area to hand over to the district as part of their development plans.

“What concerns me, and I’ve made it very clear, I don’t understand how the regional district is taxing their taxpayers to buy parks,” said Jangula.

“They are offered the most significant 260 acre park in the entire Comox Valley, perhaps in the entire Island, for free, and they don’t want to take it. I think that’s a bargaining tool that 3L have, and I’m really worried about the possibility that this park will be lost, to all of our residents, forever.”

The next step will be for staff to bring forward a consultation strategy for the board’s consideration at the August 28 meeting, according to the CVRD release.

Neither Kabel Atwall, 3L’s project manager or 3l’s owner David Dutcyvich took questions after the vote, but a statement from the company is expected tomorrow.