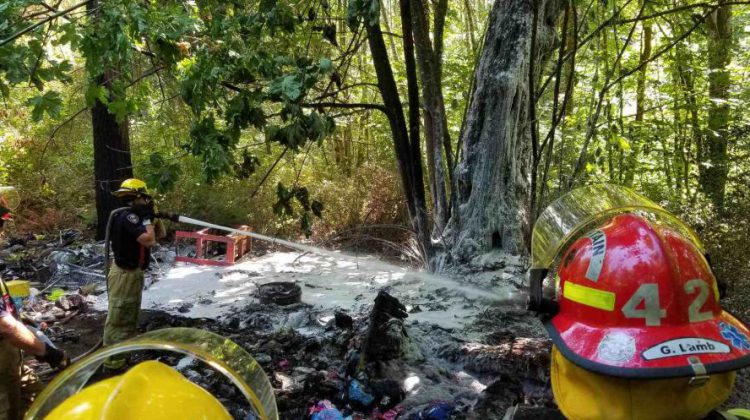 Firefighters spray down garbage and a tree at a homeless camp behind the Courtenay Walmart on July 25th, 2018. Photo by Justin Goulet/98.9 The Goat/Vista Radio

Around 1:00 p.m., the Courtenay fire department was called to a bush fire behind Walmart, in a wooded area across the old railway tracks.

The site is known to host a homeless camp, and firefighters have been called out twice in the past year to respond to incidents at the site.

When they arrived today, they found black smoke and a fire area stretching around 25 feet. Trees in the area were also catching fire, with the flames reaching around 15 feet high.

According to Dennis Henderson with the Courtenay fire department, it was lucky that the forest was still “fairly green”, so the fire didn’t spread quickly. The flames were extinguished quickly, with clean-up ongoing as of 1:30 p.m.

The exact cause is unknown, but the fire was in the part of the camp where garbage is being placed.