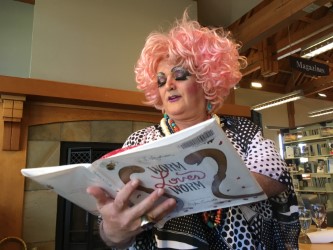 Miss Vikki read to children at the Courtenay Library on Thursday morning, as part of Comox Valley Pride Week. Photo by Troy Landreville/ 98.9 The Goat/Vista Radio

COURTENAY, B.C- “I love your hair!” a little boy shouted to Miss Vicki as she walked into the room packed full of kids and parents at the Courtenay Library this morning.

Then she sat down and started off a story hour by leading a chorus of You Are My Sunshine.

In collaboration with the Vancouver Island Regional Library, Drag Queen Story Hour was the first of its kind for the Pride Society of the Comox Valley and a highlight of Pride Week that started Monday and wraps up Saturday.

“I’m an older guy who does this for fun and comedy and stuff,” Miss Vikki told MyComoxValleyNow.com a few minutes before the story hour.

Miss Vikki (a.k.a actor Rick Meyers) says it’s important to read to children, and pass along a message of tolerance to the youngest generation.

Miss Vikki shared a story about meeting a young boy after a story hour in Nanaimo.

The brief encounter not only eased her doubts about dressing in drag while reading to children, it also reinforced the purpose behind Drag Queen Story Hour.

“I had my own internalized homophobia, thinking, ‘Is this right, for a drag queen to be reading to children? Is it normal? Is this okay?” Miss Vikki admitted.

However, the story hour in Nanaimo was a hit.

After it was finished, she met a boy named Casey.

“He came up to me wearing glitter nail polish and glitter toenail polish. He hugged me and gave me a flower,” Miss Vikki related. “At that moment I realized that this is really important. And if I could just read a story to just one kid like Casey, this whole thing is worth it.”

Miss Vikki has yet to meet any kind of backlash to date.

“The thing that always freaked me out is what are kids going to call me, what are they going to ask (concerning) what I am,” she said. “One little boy in Nanaimo asked me if I was a man or a lady.”

The boy took the answer for what it is.

Meyers is used to being around kids. His partner of 22 years already had children when they met.

“I helped raise his children – I guess I should say, our children,” he said.

Miss Vikki said it has a “big connection to pride and to diversity.” 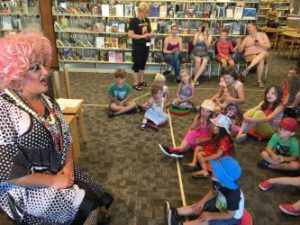 Meyers is a good friend of Pride Society of the Comox Valley’s acting president, Phyllis Katcher.

“He mentioned this to us when he did the first one (story hour) in Nanaimo, and it was extended to North Island Pride, as well,” Katcher said. “It is important for the children to have story time and to have the exposure and I thought this would be absolutely perfect for our library here.”

Katcher said that while there are always going to be barriers in Courtenay and Comox, “it’s still a lot better than a lot of other communities.”

“It is building,” Katcher said. “As we can see from Pride Week this year alone, we’ve had the family swim from the regional district as well as the Vancouver Island Regional Library, so that is a positive step forward.”

Even so, judging from hateful comments on social media, Katcher realizes there is plenty of work to be done.

“That’s why we are here,” she said. “When we no longer have to raise (Pride) flags, then we know we are all one society.”