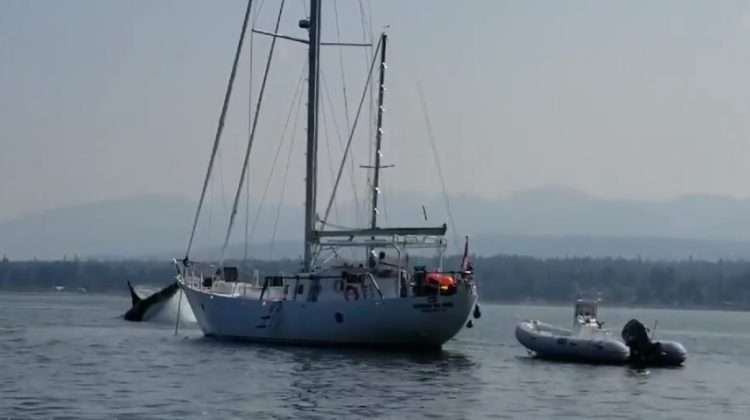 COMOX, B.C- A local boater will have an interesting story for his insurance company this week.

Over the past week, the Comox harbour area and Royston have been hosting a visiting orca whale, known by the authourities as T073B. The 27-year old whale has been in the area since last Monday afternoon, after breaking off from a group of orcas last Sunday.

The animal is believed to be feeding on local seals, and many residents of the Valley have been making their way to the shoreline and on the water to watch him swim around and jump out of the water.

However, one family got a bit more than they bargained for when they took the boat out to escape the hot weather. According to Dan Campbell, the owner of the sailboat “R-Therapy”, the whale grabbed his anchor chain on Sunday afternoon.

Campbell told MyComoxValleyNow.com that he and his wife had left the boat around noon, to head back home and let their dogs out, anchoring the vessel prior to heading out. When they came back close to 3:00 p.m., the sailboat had moved.

“We pulled into the parking lot, and I didn’t see our mast,” said Campbell.

“The wife thought I was joking, and we got in the dinghy and motored out there, and sure enough the sailboat wasn’t where we left it. Drove around, sort of frantically looking for it, and saw a couple waving from their yacht.”

The couple had tied up the rogue boat next to their vessel, after watching it pass them by without anyone onboard. The movement of the sailboat was captured on video, as well as the collision between both vessels when the whale decided to stop tugging.

Campbell said that the other vessel had superficial damage, while R-Therapy had some bent railings. He’s anticipating an interesting conversation with his insurer.

“I’m not quite sure how I’m going to explain,” said Campbell.

“I’ll have to read into the fine print of our policy, and see what whale coverage we have. We have video proof, so hopefully that helps us out. We’ll see. It’ll be an interesting conversation, that’s for sure.”

Campbell said that the Department of Fisheries and Oceans was called, as well as the Coast Guard, after others in the area had seen the unattended sailboat “ripping around” the marina.

He also stated that he was told by Fisheries and Oceans that this particular whale is known for playful behaviour, such as the grabbing of the anchor chain.

“They said he’s probably just playing with it, taking it for a joyride,” said Campbell.

After retrieving the sailboat, they stayed out the rest of the evening, eventually bringing it back into the harbour.

The orca is still believed to be in the area.

The MyComoxValleyNow.com has reached out to the Department of Fisheries and Oceans for comment on the incident.

IMAGE CAPTION: The whale leaves after letting go of the sailboat, which is behind the other vessel.