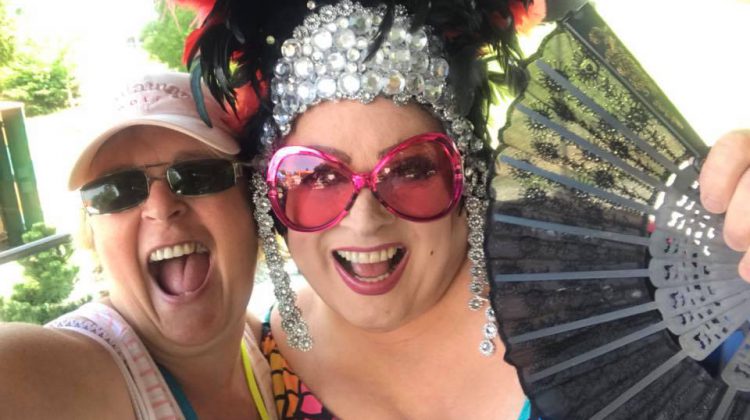 A good time was had during Pride In The Park at Simms Millennium Park, which wrapped up Pride Week in the Comox Valley. Photo courtesy of the Pride Society of the Comox Valley Facebook page

The acting president of the Pride Society of the Comox Valley said the week – which kicked off July 23 with Pride flag raising ceremonies and wrapped up Saturday with Pride in the Park – was a big success.

“I think it went exceptional considering we had a couple of additions to our Pride week from years past,” Katcher said, referring to the all-inclusive Pride Swim on July 23 at the Comox Valley Aquatic Centre, and Drag Queen Story Hour at the Courtenay Library on July 26.

The Drag Queen Story Hour was a hit with both kids and their parents.

This came as no surprise to Katcher.

“I had seen the one (story hour) that was in Campbell River (during North Island Pride in June),” she said. “Children are not judgmental. It’s us as parents that teach our children to have acceptance. The children who came were there with the consent of their parents and were very open-minded.”

Katcher said “the growth of Pride Week itself,” was a highlight.

“With those two additions to Pride Week and an overwhelming response of requests for information vendors at Pride this year – that for us, was the highlight.”

The sizzling heat was a factor during Saturday’s Pride In The Park wrap-up event at Simms Millennium Park. She said people in the event were scattered around the park to find shade.

“We had steady streams (of people),” Katcher said. “I think we had two (factors) in it, in the fact of the weather being extremely hot, and the date for Pride. Overall, the attendance was… pretty comparable to what we had last year.”