No injuries in Cumberland hedge fire 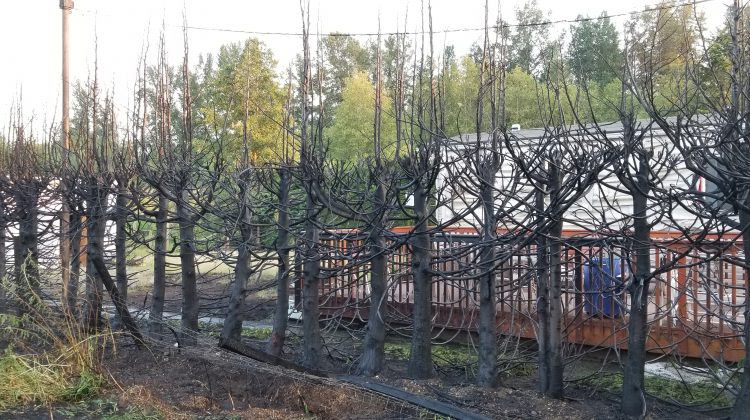 The damage from a hedge fire in Cumberland on Tuesday, July 31 2018. Photo by Justin Goulet/98.9 The Goat/Vista Radio.

CUMBERLAND, B.C. – Hedges went up in flames at a Cumberland property on Tuesday night.

The Cumberland Fire Department responded to a residence near the intersection of Union and Royston Roads at around 8:00 p.m.

Cumberland Fire Chief Mike Williamson said one of the two residents at the property noticed the hedges on fire while doing some yard work and alerted the department, who actually spotted the flames before the call came through.

“We were out doing some fire practice, so we were just (nearby) and got to (the property) pretty quick,” Williamson said.

The fire started at a pole in the centre of the hedges, according to Cumberland Fire. Photo by Justin Goulet/98.9 The Goat/Vista Radio.

The fire started at the centre of the hedges, and spread both ways.

He said the severity of the flames caused siding on the house to melt. Aside from that, no other damage was reported and there were no injuries in the incident.

Williamson noted the situation could have been a lot worse, as the house was backed by an open field.

“We have several exposures here, cars in the garages, the house right here and this, a few feet away, could have been super serious,” he explained to MyComoxValleyNow.com on scene.

He said that ashes were seen blowing down as far as Windermere, but no other flames were reported and crews knocked down the fire in short order.