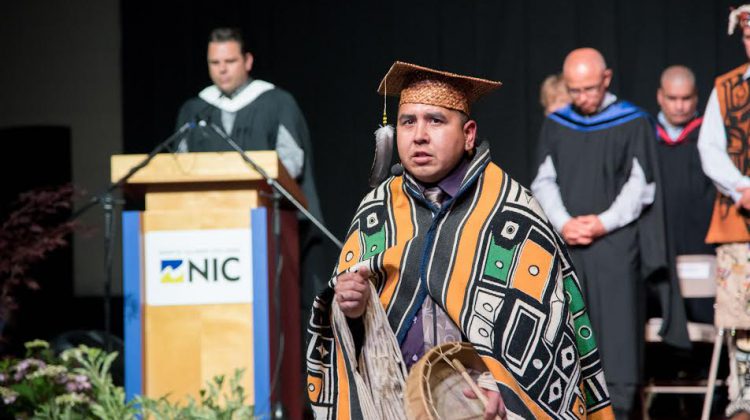 Instead he wrote a new narrative, one of healing, of hope, of helping to piece together lives broken and sometimes shattered by the demons of drugs and drink.

He’s doing this by passing along traditional First Nations teachings and blending them with what he learned at North Island College.

Father to a 10-year-old son, Dawson has been sober for three years and nine months.

Now he’s opening a next chapter in his life with his new role as a peer counsellor and night attendant at the Comox Valley Recovery Centre.

“They really embraced my practicum, there, and allowed me to bring in a lot of my culture and my drum and my singing,” Dawson shared. “And a lot of the clients are really taking a liking to that.”

Dawson said aboriginal clients have really taken to him singing and talking in his language.

“It’s inspired them to want to learn more about who they are and where they come from and learn about their cultural ways.”

Working at the recovery center is an especially poignant achievement for the NIC grad, because that’s the same facility where he completed his own addictions treatment.

He continued his education, graduating with his Human Services diploma this year.

“I’m working at a treatment centre that saved my life and I feel it’s come full-circle.”

He didn’t do it alone. Dawson leaned heavily on the support of both his aboriginal community and the one that surrounds him.

A member of the Kwakwaka’wakw Nation who was born and raised in K’ómoks First Nation territory, Dawson began getting in touch with his culture after his father’s passing in 1997.

Not long after their dad’s death, Dawson’s family sent him and his brother on a canoe journey from Comox to Victoria for the North American Indigenous Games.

In terms of learning about who he was and where he came from, it was a turning point for the then 14-year-old.

“That planted the seed really for my culture,” Dawson told MyComoxValleyNow.com, “and continuing to learn from my culture, I learned a lot about love and respect, and that led me towards helping to guide and mentor young people.”

But after his dad passed, Dawson admitted that he went into a dark place.

“I kind of spiraled down and I didn’t really have too much passion for life,” Dawson said.

He battled addiction on and off for many years, leading to the day he left substances behind.

“I have a huge family that struggles with addiction,” Dawson said. “When I think about it now, (there’s) a saying about a young aboriginal youth who went to his Elders and said, ‘I can’t stop drinking and I can’t stop drugging.’ And this Elder simply replied, ‘When did you stop singing and when did you stop dancing?’”

This made Dawson reflect on his own journey.

“I found that every time I was away from my culture, that’s when I was in the dark places,” Dawson said.

“I believe culture is a significant part of finding out my true identity,” he said. “It fills my heart with a lot of purpose and belonging, you know?”

And through his culture, Dawson has learned about humility.

“I strongly believe in the teachings of the circle,” Dawson said. “No one is above you; no one is below you, in front of you or behind you. That circle teaches that we are all one. We’re here on this sacred earth together and we’re walking together. We need to treat each other as one.”

Dawson realizes that the healing journey he is on is going to last a lifetime.

“Accepting that is a beautiful thing,” he said. “It keeps my eyes clear and my ears clear. I’m always looking for and seeking the beautiful things in life.”