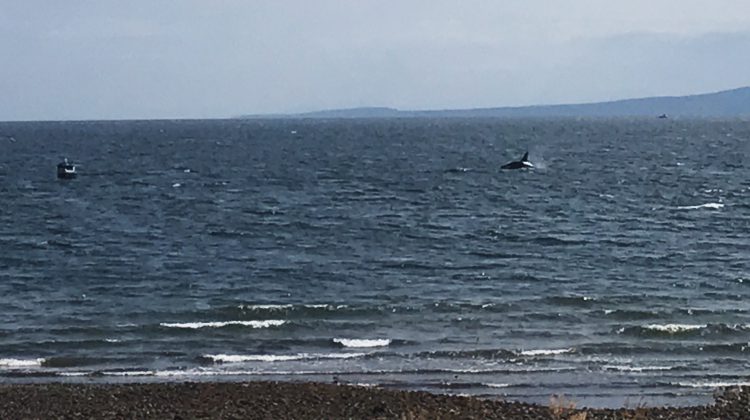 COMOX, B.C- The orca visiting the Comox harbour may be on his way out.

Since July 23, the whale has been present in the harbour area, believed to be feeding on seals. Hundreds of people have been watching the animal from the Comox waterfront, as well as Royston, with many boaters making their way onto the water to get a closer look.

The presence of vessels has led to at least one instance of the whale grabbing the anchor chain of a moored sailboat and pulling it through the harbour, while the owners were on-shore. The sailboat was damaged, but the whale and others present on the water didn’t suffer any injuries.

Authourities have said the whale’s behaviour is unusual and unpredictable, and have been monitoring the animal.

“DFO’s marine mammal coordinator, whale experts from our Science Program and several fishery officers, are on site to monitor the whale and continue to remind boaters, kayakers, canoeists, paddle boarders and others on the water of the need to stay well away from the whale,” stated a release from the Department of Fisheries and Oceans on Thursday afternoon.

“Conservation and Protection fishery officers on the Fisheries Patrol Vessel the M.Charles, and patrol RHIBs, are coordinating their efforts with aerial surveillance overflights as they actively manage the situation through day and evening enforcement patrols. DFO Communications will continue to send out updated information to media as the situation evolves.”

At the time of the release, the whale had not shown any sign of leaving, and was believed to be in good health. The DFO had been consulting with the community about how to best manage the situation, with the upcoming Nautical Days celebration over the long weekend.

Concerns raised over the animal’s safety had led to a call for the Town of Comox to change plans for a Monday night fireworks display. Paul Ives, the mayor of Comox, said those plans were unchanged as of Thursday morning, pending a DFO decision.

However, those plans may not need to be changed.

According to Ives and multiple eyewitness accounts, the whale has left the harbour area, and is now heading north. Ives said it had been spotted off Point Holmes and Kye Bay, headed towards open water in the Salish Sea. A video taken around 2:00 p.m. by Kevin East shows the whale moving along the coastline.

“Throughout this process, we’ve been in contact with DFO, and we’ll abide by any concerns or notices they might issue to boaters or otherwise,” said Ives.

“They had a plan this weekend if the whale was around to notify boaters and they may still have to implement that as they go, but for the time being, it looks like the whale is gone. In the vernacular of previous Nautical Days, Elvis has left the building.”

As for the visit of the whale, Ives was both happy to have it happen, and happy the animal was on its way out.

“I think Mother Nature always has surprises for us, and this was a nice surprise, to have a whale visit here,” said Ives.

“I think there was also lots of other concerns and issues that residents have raised around the safety of the mammal itself, and also of course the safety of people.”

An advisory issued by the DFO on Thursday has recommended all motorized and non-motorized vessels stay out of the harbour to minimize interaction with the whale. As of this publication, it remains in effect.

It can be read below.

Fisheries and Oceans Canada advises all motorized and non-motorized vessels (kayaks, canoes and paddleboards) to stay out of Comox Harbour unless absolutely necessary to minimize any interaction with the lone Transient killer whale (T073B) currently in Comox Harbour.

This Bigg’s killer whale may approach and interfere with boats in the harbour which could cause serious damage to you and your vessel.

Bigg’s killer whales eat marine mammals and by interacting with this whale you increase the risk of habituation and reduce this animal’s ability to find prey.  Killer whales are extremely intelligent and even a minimum amount of contact can reinforce negative behaviours.

Fisheries & Oceans Canada reminds the public that it is illegal to disturb any marine mammal in Canada.  Regulations require boats to stay at least 100 metres away from most marine mammals and 200 metres away from killer whales. (Marine Mammal Regulations). http://www.gazette.gc.ca/rp-pr/p2/2018/2018-07-11/html/sor-dors126-eng.html.  Violators face potential fines of up to $500,000.

The MyComoxValleyNow.com newsroom has reached out to the DFO for an update on the situation.

IMAGE CAPTION: The whale is pictured off of Point Holmes in Comox around 2:00 p.m. on August 2nd, 2018. Photo by Kevin East.