Gun involved in home-break in on Petersen Road 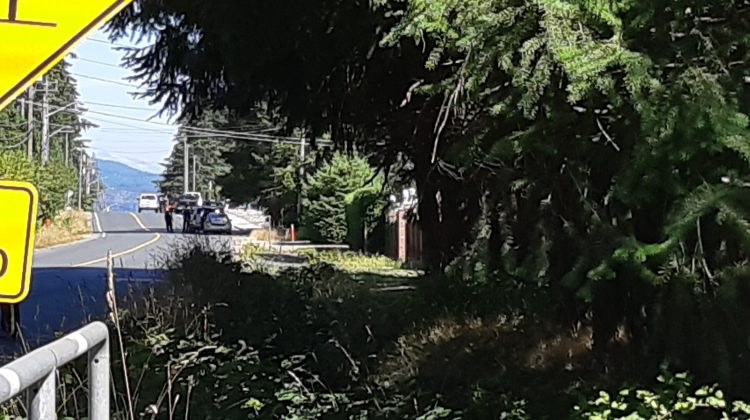 CAMPBELL RIVER, B.C- A man was arrested after a home-break in on Petersen Road in Campbell River yesterday.

According to a news release from Cpl. Ron Vlooswyk of the Campbell River RCMP, a man on Petersen Road came home to find his things “strewn about his living room”, and upon hearing a noise, called out. Another male “stepped into view and confronted the homeowner with a gun”, the homeowner ran outside and called RCMP.

Vlooswyk said that all available resources from the CR RCMP responded, including a police service dog and a drone.

Petersen Road was contained by police, residents were asked to stay indoors as the Vancouver Island Emergency Response Team and a negotiator arrived at the scene.

The Team entered the home where they located one male who was arrested without incident.  No one was injured and no shots were fired, however, police seized two rifles from the scene.

The road was closed for around five hours, police were redirecting traffic around Old Petersen Road.

“At no time was the public in danger,” said Vlooswyk.

“Appropriate precautions were taken to ensure everyone’s safety and we appreciate the understanding and patient residents of the Petersen Road area during this incident.”

According to RCMP, the 24 year old male who has no known fixed address will appear in court in the morning on charges including break and enter and pointing a firearm.

“The investigation is in the very early stages and considerable work is yet to be done by detachment members and Major Crime Unit,” said Vlooswyk in the release.

Campbell River RCMP want to remind gun owners to ensure their firearms are locked and ammunition is stored separately at all times.