Glacier Kings ready to put ‘rough season’ behind them 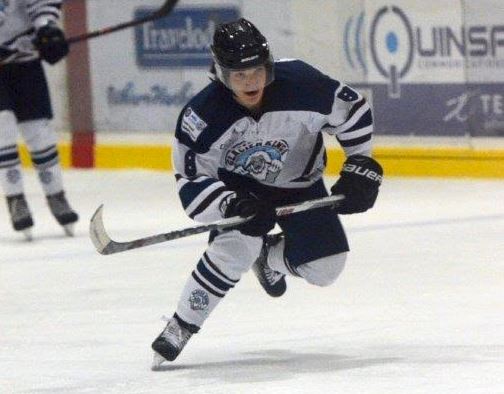 Benny Alexander is one of the players returning to the Glacier Kings this season. Photo courtesy Jim Hockley

That’s all the Comox Valley Glacier Kings could muster over a 48-game season.

The 43 losses the Glacier Kings suffered during a miserable junior B hockey campaign ate away at the coaches and players, a few of whom didn’t see the season through to its conclusion.

But a Glacier Kings alum who has taken the interim head coaching reins is determined to help make things better once the puck drops to open the Vancouver Island Junior Hockey League campaign on Sept. 6, when the local boys travel to Victoria to play the Cougars.

Jordan Kamprath is the team’s head coach (for now) after his predecessor Jordan Butcher stepped down to focus on other commitments.

Kamprath has close ties with the Glacier Kings. He served as an assistant coach for the squad for two seasons, taking a year off in between to focus on building his career.

In his playing days, Kamprath captained the Glacier Kings, eventually finishing his career with Comox Valley. He also suited up for the Campbell River Storm, wearing the ‘C’ for that squad as well.

Reflecting on last season, when the Glacier Kings dwelled in the basement of not only the North Division but the entire VIJHL, Kamprath said it was a troubling campaign from the get-go.

“We definitely had a rough season,” he said.

Kamprath insists that the Glacier Kings were competitive on paper, but as the season wore on they were reduced to a skeleton crew.

“We ended up with such little numbers that we couldn’t keep it up for a full 60 minutes against top teams or any of the teams, really. We ended up with 13, 14 players at one time while other teams (had) 20. With endurance (opponents) would keep going and going and we would just slow down eventually in the third period and get overran.”

What was the reason for the low numbers?

“We had a few injuries but we also had a few players quit without notice,” he said. “Again, with the season we had was very trying for a lot of players, and some people just couldn’t deal with it and they ended up just quitting hockey.”

Losing players this way was not an easy situation for anyone with the team, Kamprath said. “We always told players that if they wanted to get traded we would do what we can to trade (them) to other teams because of the season we were having.

“We never want players to quit, we always want them to continue loving hockey and loving playing and we will do everything we can to move them to a team if they’re not happy with where they are.”

That said, Kamprath vows that if he has 25 players to start, “we will do much better than what we did last season, especially with the crew that we have coming back.”

A new season means a new start and one of the key returnees is forward Jordan Neufeld, a Courtenay native who is coming off his rookie season with the Glacier Kings.

“He has done a huge amount of work this summer and I’m looking forward to how he’s going to play this year,” Kamprath said.