Rowhomes on the rise in Comox Valley 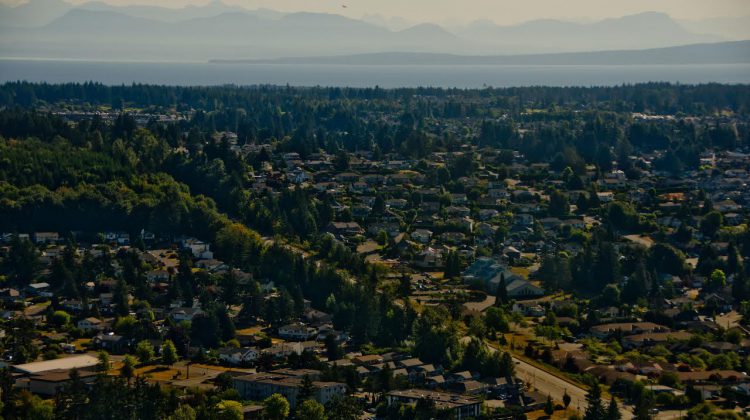 Part of the east end of the Valley is pictured from the air on Monday, August 6th, 2018. Photo by James Wood/98.9 The Goat/Vista Radio

This is one of the findings of the recently released ‘Business Counts’ report from Discover Comox Valley.

Overall, housing starts jumped 30.4 per cent over the first half of 2018, compared to the same period last year.

“In Comox itself we’ve seen steady growth,” Ives said. “I think Courtenay has probably had more housing starts, they have more land available for building lots. We’re looking at opening up some new lands for building in the northeast Comox area, but generally speaking we’re seeing a lot of movement here out of the Lower Mainland, (and) across the prairies. That seems to be the biggest drivers of growth.”

The number of rowhome development starts in the valley rose exponentially, from four over the first six months of 2017 to 46 year-to-date (YTD) in 2018. That marks a 1050 per cent increase year to year.

Ives said a lot more young families are moving to the valley and looking to get into the market, hence the jump in multi-family developments.

“The amount of single family lots that are available right now within the City (of Courtenay) and the Town (of Comox) are limited, (and) I think there are a few more available in Cumberland. I think it also reflects people’s desire to live in a closer proximity to where they work or towards downtown areas.”

Ultimately, it comes down to what families can afford nowadays, Ives noted, with single family homes averaging out to be $550,000-plus in price.

“Any of the townhouse developments that have happened in Comox and Courtenay and in Cumberland, they’re selling literally like hotcakes,” Ives said.

“They’re going fast and people are seeing that as an opportunity to get into the market which they otherwise wouldn’t be able to do for a single family home.”

The report also shows that building permits rose in value across the board.

Ives said the economy is “generally going well,” which he says is opening up more opportunities for people to work in the valley.

“We hear all the time of business growth within the valley,” he said, pointing to the possibility of two new brewpubs coming to downtown Comox.

“The more and more expansion that occurs it kind of feeds on itself and as the businesses grow, then they need employees  and people move here, and make a life for themselves,” Ives said. “That’s been a long trend I suppose in my 26 years here. There’s been ebbs and flows but generally in the last four or five years it’s been pretty positive.”