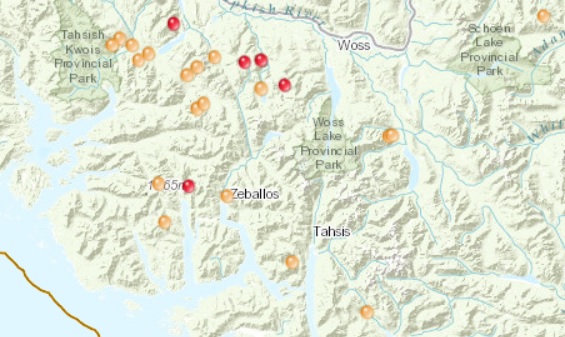 NORTH VANCOUVER ISLAND, B.C. – A wildfire in the North Island has grown this morning.

According to the Coastal Fire Centre, a fire near Pinder Creek is burning above the road down to the Village of Zeballos, with around 80 hectares involved as of this morning.

Near Tahsis, a fire is burning close to Head Bay Road. It is 75 per cent contained, and is around eight hectares in size. Ten firefighters are working on the blaze, along with crews from BC Hydro to protect the power line.

A fire also lit up on the outskirts of Zeballos, on a bluff overlooking the village. The centre indicated that the fire was getting bucketed earlier today, with more bucketing planned.