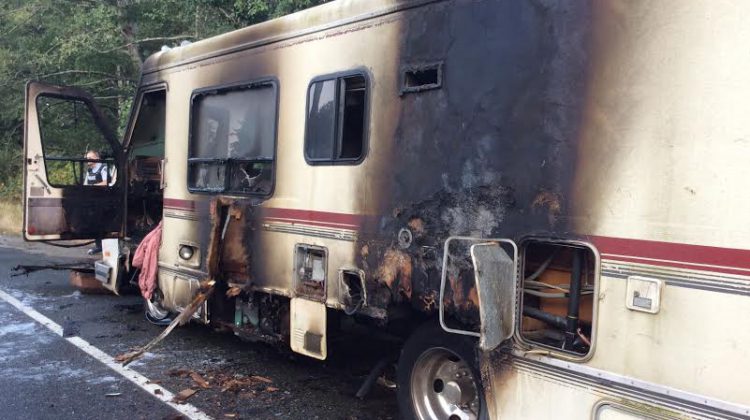 COMOX, B.C. – A road trip to Tofino went up in flames for a motorhome traveller in the Comox Valley.

The owner’s motorhome caught fire on the side of the road early Wednesday evening.

Assistant fire chief Jim Lariviere said Comox Fire Rescue received a call at roughly 7 p.m. about a 25- to- 28-foot Winnebago-style motorhome that was on fire at Ninebark Way and Military Row.

By the time crews arrived, Lariviere said the motorhome was on the side of the road and “fully involved (with) lots of black smoke.”

Lariviere said there was “whirling black smoke and you could hardly see the vehicle, with flames coming out of it.”

“Our concern was it was right underneath some trees and it was a wooded area, there,” Lariviere said. “In this weather (it) could have been even bigger.”

The lone occupant managed to get out of the motorhome.

“He left the vehicle once it caught fire,” Lariviere said.

The driver had planned to put some gas in the motorhome before heading west to Tofino for an event.

Firefighters from Comox Fire Rescue and 19 Wing Fire extinguished the blaze in 20 minutes, according to Lariviere.

Comox Fire Rescue sent two trucks while 19 Wing Fire had one truck at the scene.

Altogether, 15 firefighters worked together to put the fire out completely.

The source of the engine compartment but as to why it caught fire, “we’re not sure,” Lariviere said.