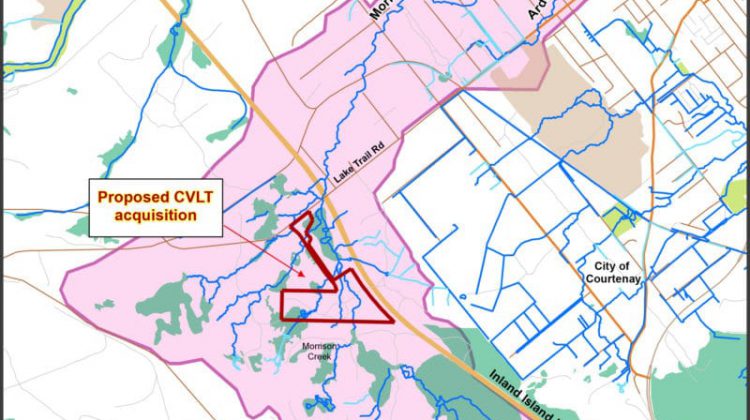 A map of the land the CVLT is looking to purchase, courtesy of the Comox Valley Land Trust.

COMOX VALLEY, B.C. – A local group wants to preserve a parcel of creek land in the eastern portion of the Comox Valley.

The property is owned by BG Linton Construction, Ltd.

“In a nutshell, the eastern lowland portion of the Comox Valley has seen a significant development over the past decades and centuries, to the point where our intact natural ecosystems have been reduced to a fragment of their former glory,” he said.

Ennis noted that their research has shown that there is about four per cent of the land base remaining in its initial intact state.

“What we’re trying to do here is to protect one of the last remaining large areas of good, core habitat for fish and wildlife in the Comox Valley and that’s a little known place we call the Morrison headwaters,” he said.

Ennis explained that if their fundraising goal is reached, their plan is to have a local parks agency look after and maintain the property.

He said talks are underway, and he could not release the name of said parks agency.

“We still have a few more meetings to get through to just sort of put the icing on the cake and cross the t’s and dot the i’s, but that should be something that comes forward before the end of the month,” Ennis said.

He said there are already “light foot print” trails throughout the Morrison headwaters area, and the CVLT would like to see those maintained.

“There probably won’t be too much in the way of building new trails in there, but the existing system is quite popular with those that know how to get into it,” he said.

According to Ennis, their main goal is to protect the local habitat and endangered species living on the property.

Ennis said fundraising activities have been split into “two types”, including grant funding, and community engagement.

“We’re reaching out to major funders that typically fund land acquisition for conservation purposes, and the second half is what we call local community fundraising,” he said.

“We’re looking to try and bring in about another $50,000 of local community support from people in the community that share our passion for this particular conservation vision.”

Funds can be donated via the CVLT’s website at cvlandtrust.ca/morrison-headwaters. The campaign is open until March 31st, 2019.