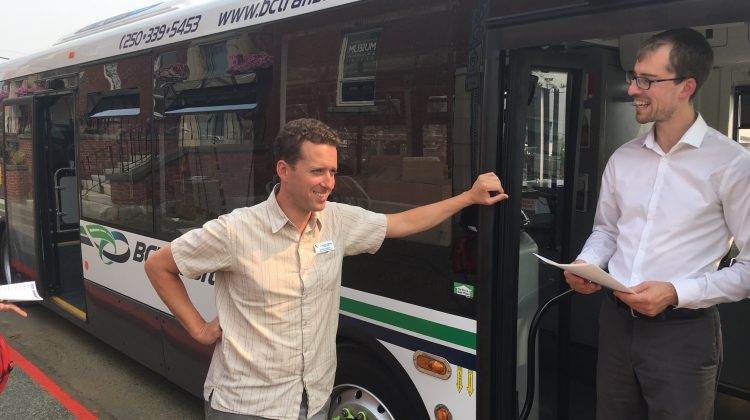 Starting next Friday, August 31, valley transit users “will benefit from increased service levels, improved connections, and route restructuring that will enhance service to high density areas and connect people to key destinations throughout the region,” according to a release.

This system includes 4,000 new service hours to the Comox Valley Transit System, and involves establishing a Frequent Transit Network (FTN) between Courtenay and Comox — a priority identified in the Transit Future Plan as approved by the Comox Valley Regional District (CVRD).

BC Transit senior planner Levi Megenbir spoke about the changes during a press conference inside one of the new conventional buses about to be added to Comox Valley’s fleet.

Megenbir said the FTN “was identified as something the community would like to see.”

“This proposed plan would have service every 20 minutes in the peak periods – the a.m. peak and the p.m. peak,” Megenbir added. “In the off-peak periods it varies a little bit more, but it’s still a reasonably high level of service in comparison to what we currently have on most of our routes in the Comox Valley.”

FTN service will be offered through the new route 1 Anfield Centre/Comox Mall, which will replace existing routes 1 Fitzgerald and 34 C2C, and part of route 3 Comox via Ryan & Lerwick.

Offering 20-minute service at peak hours, route 1 Anfield Centre/Comox Mall will run from Anfield Centre along Fitzgerald to downtown Courtenay, up Ryan Road to North Island College, and down Lerwick and Anderton to Comox Mall.

To better link to the FTN from almost anywhere within the system, the following routes will also see significant realignment:

Megenbir spoke about one new re-alignment that will benefit Comox residents.

CVRD manager of transit and sustainability Michael Zbarsky said the network changes comes in response to what the district had been hearing from the public.

“A lot of new people have moved to the Comox Valley and they’re wanting a more modern service, and a more frequent transit service,” he said. “They wanted that late evening service so they can go out and socialize in the evenings, and so it was really key to be able to incorporate those kinds of changes with this expansion.”

Zbarsky said the district hopes the network will get more people on buses, therefore reducing greenhouse gas emissions, with fewer cars on the roads.

In addition to these changes, routes 1 Anfield/Comox Mall and 2 Cumberland/Anfield Centre will offer late night service on Fridays and Saturdays.

BC Transit interim president and CEO Erinn Pinkerton said BC Transit is working closely with local government and the CVRD to address the changing needs of a growing Comox Valley.

“The FTN and all related route realignments will better connect people and communities in the Comox Valley,” Pinkerton said.

The fares also include a more broad-based transfer system.

“Before you could only transfer at certain locations within the Comox Valley, but now with this change in transfer policy you are able to transfer wherever within the network which helps people to access the Frequent Transit Network,” Megenbir said.

The new system is also bringing in expanded hours. A late-night service on Fridays and Saturdays along the FTN and to Cumberland is part of the changes.

Fridays and Saturdays, final buses will leave Anfield Centre at 11:25 p.m. and arrive at the Comox Mall at 11:48 p.m.

And the last buses are scheduled to leave Cumberland at 11:09 p.m., roughly two hours later than the previous schedule.

For transit routes and schedules in the Comox Valley, and to access NextRide to plan your trip online and find out where your bus is in real-time, please visit bctransit.com/comox-valley.